TROVE just keeps on giving.. There are so many lists available that could possibly be of help in determining where our ancestors came from... The list of Immigrants who arrived on the GOLCONDA in October, 1858, is one such list. See below... 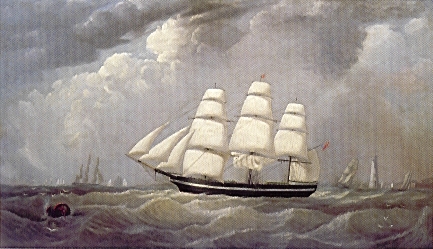 IMMIGRANTS per GOLCONDA.—Notice is hereby
given, that the undermentioned persons, for whom
passages were provided to this colony. In pursuance of de-
posits made under the Remittance Regulations, have arrived
in the ship Golconda, and that they will be prepared to join
their friends—the single females, from the institution in
Hyde Park Barracks, on and after their arrival there, and
the families and single males, from the ship on SATURDAY next, the 23rd instant, at one o'clock p.m.

I decided to look a bit further and have included the details of the crew, thanks to Mary-Anne Warner's great site...
http://marinersandships.com.au/1858/10/046gol.htm 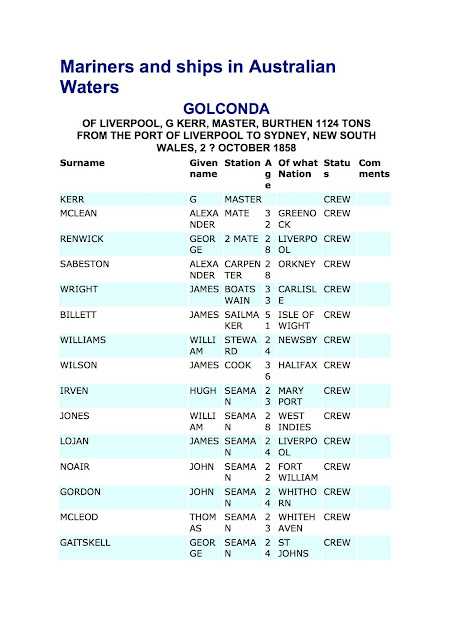 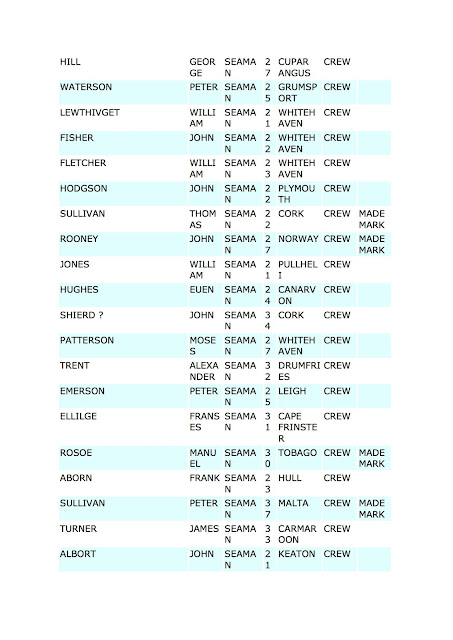 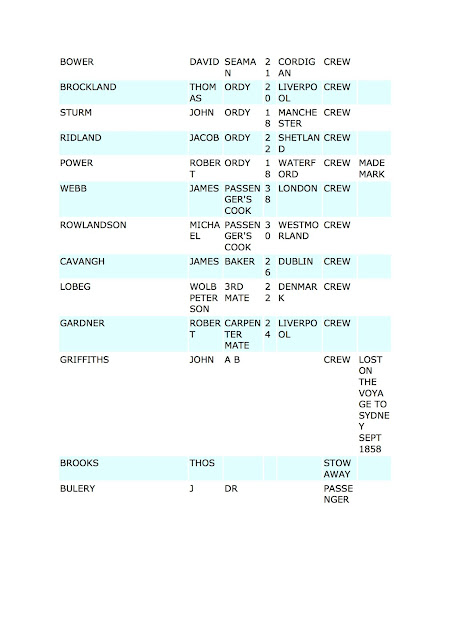 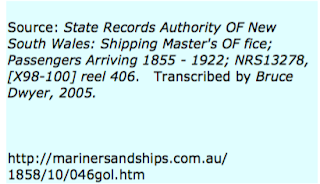 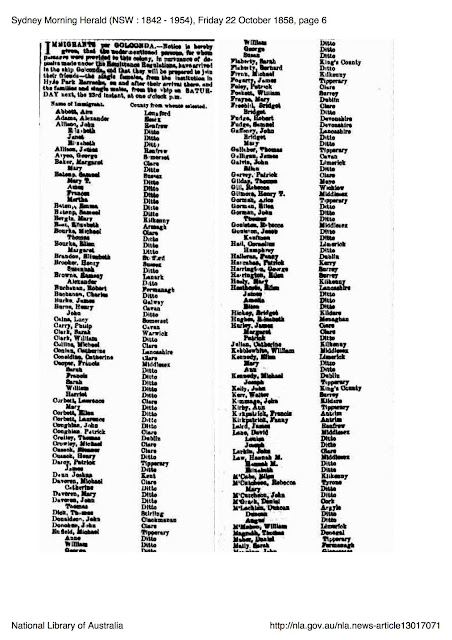 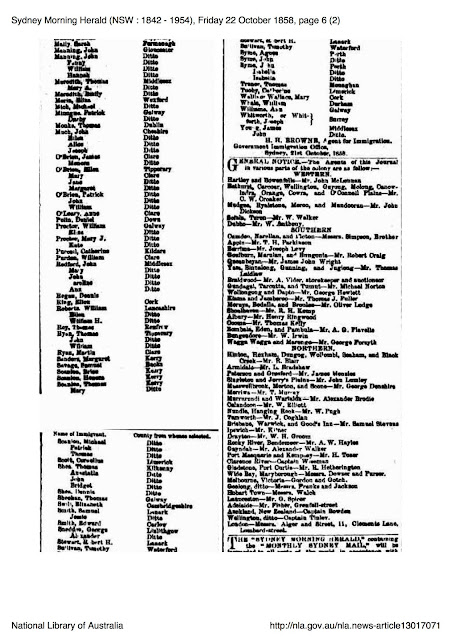 Do leave a comment if you find any of your ancestors in this list.. it's always good to know that someone has been found. 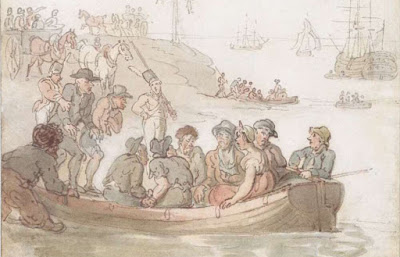 Arrival of the first convicts to Australia, National Library Australia


Western Australia received it's first convicts in 1826. They were sent to King George Sound, on the south west coast of what we now know as Western Australia. The sound was initially called King George the Third's Sound, rather a mouthful I would think. Common usage prevailed...

Twenty three convicts, with troops, were sent there to establish a settlement, remaining for around four years, till November 1830, when they were transferred to Swan River Colony, which had been a free settlement. Having convicts arrive wasn't popular with the free settlers, and as the articles from TROVE will show, there were mixed reactions over quite some time. While the labor force was welcomed by some to establish roads and structures, others would have preferred to remain a free settlement.


You can read more about the early days at


The following article appeared in several papers, this is the clearest version ... There was quite some unrest still in 1856... 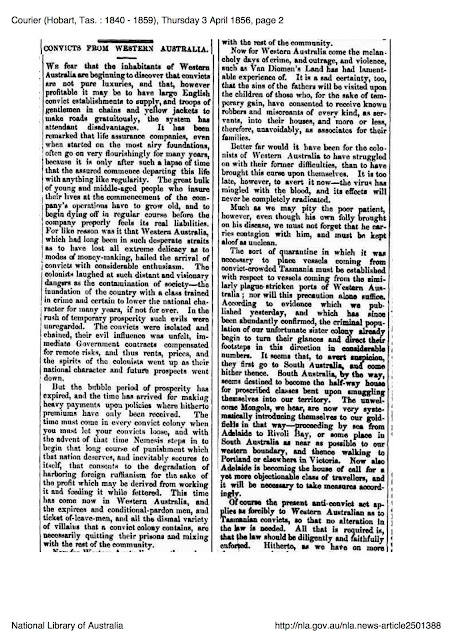 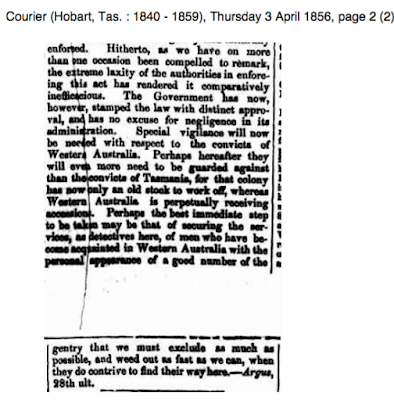 Not all felt that the convict presence was in error... 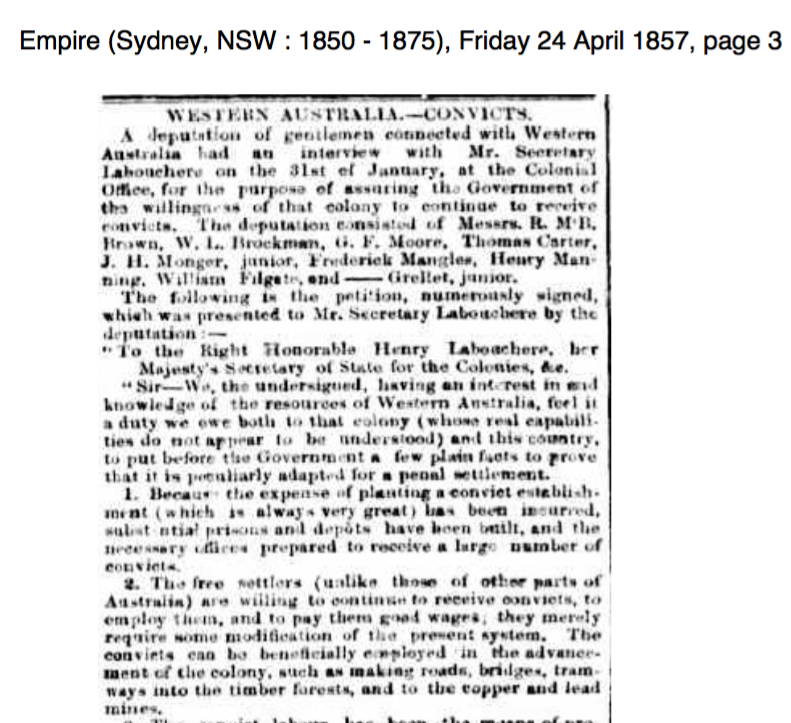 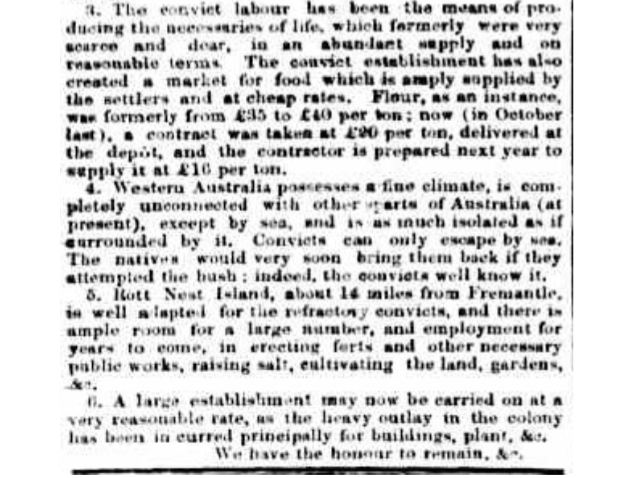 Just a couple of months later it was decided that accepting female convicts would be beneficial, in many ways.

First page only, the rest is transcribed for convenience. 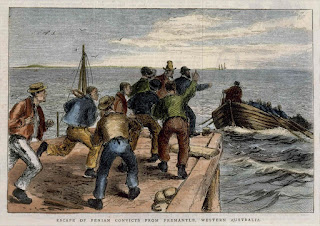 Of course, where there are prisoners, there are always attempted, and some successful, at least for a time, escapes...

DARING ESCAPE OF FIVE
CONVICTS FROM FREMAN-
TLE, WESTERN AUSTRALIA.
The following particulars are related by a
cabin passenger from Fremantle, by the
Francis, which arrived at Adelaide on
Saturday, 19th ult. About seven days
prior to the departure of the above
named barque, the inhabitants of Fremantle
and Perth were thrown into a state of alarm
by the intelligence that five of the most des-
perate convicts had escaped from the Stock-
ade, which unfortunately turned out to be too
true, and their well-concerted plan of escape
had up to the time of the departure of the
Francis succeeded in evading their recapture.
It appears that shortly after they cleared the
Stockade, escaping the usual vigilance of the
guards, they managed to make themselves
master of a whaleboat then lying on the
beach, and without hesitation ran her up to a
small island known by the name of Garden
Island, eight miles from Fremantle, which
is inhabited by only one man, his wife, and
family ; the man's name is James Reed ; he
holds some office under Government. On
reaching this place the villains securely lashed
the man and his wife, and after regaling
themselves on the best the house afforded,
they decamped, having first secured a
caronade which they placed in the bows of the
boat, also taking a good supply of ammunition,
provisions, Colt's revolvers, muskets, and side
arms. They steered in a northerly direction.
Shortly after their departure from Garden
Island, the Water Police called there on their
way in search of the absconders from Fre-
mantle, and on being informed that the objects
of their search had just taken their departure,
the police, instead of following up, turned tail,
and went back to Fremantle, from thence on
to Perth. It is much feared by the authorities
at Western Australia that these bolters, being
well armed, will make themselves masters of
some vessel employed in the coasting trade, so
as to carry out their views of escape. One of
these convicts was the mate of the Lady Stir-
ling. They are all very determined ruffians,
and bloodshed, it is anticipated, will be caused


by their escape from captivity. 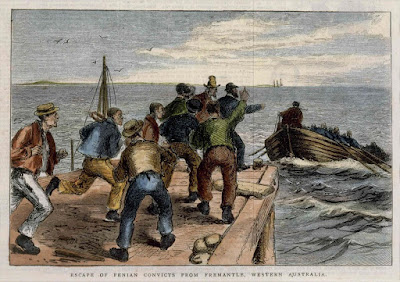 Headlines were written all around Australia, when just as there was beginning to be an acceptance that convict transportation might be ending, another suggestion was put forward... 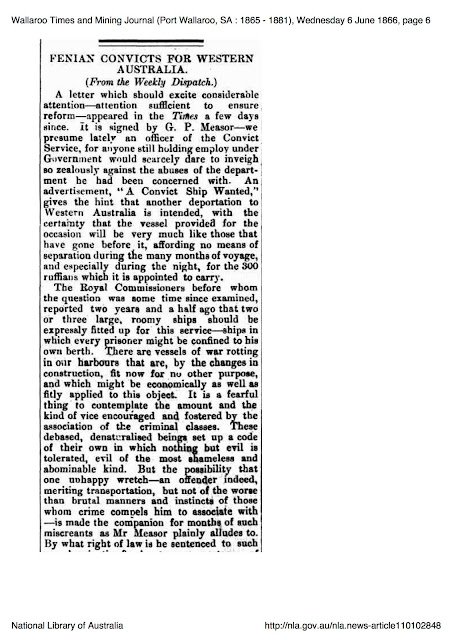 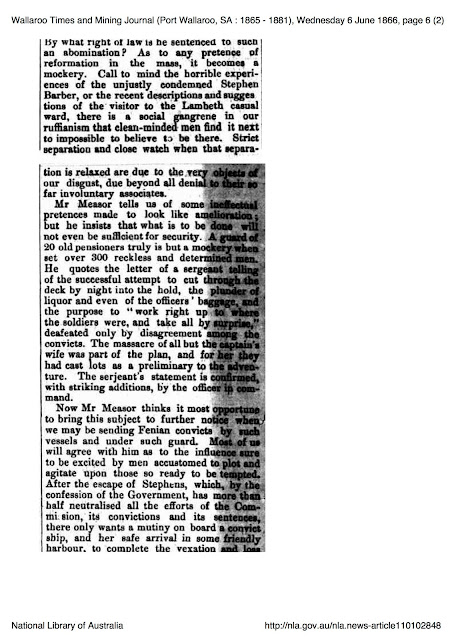 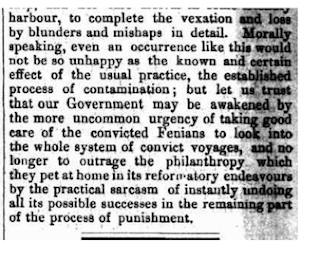 Some of the most interesting items I came across were letters from one of the Fenian convicts... 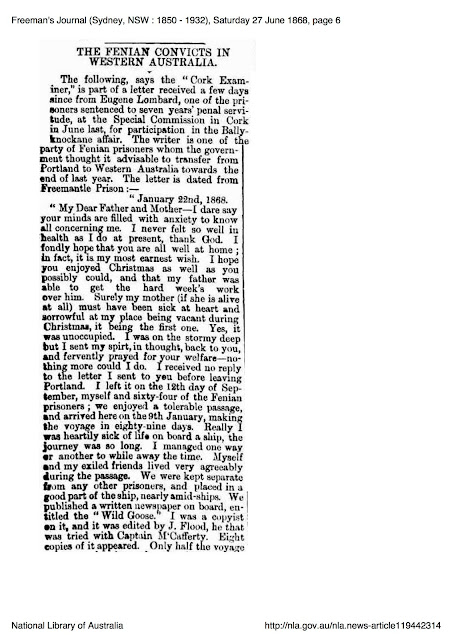 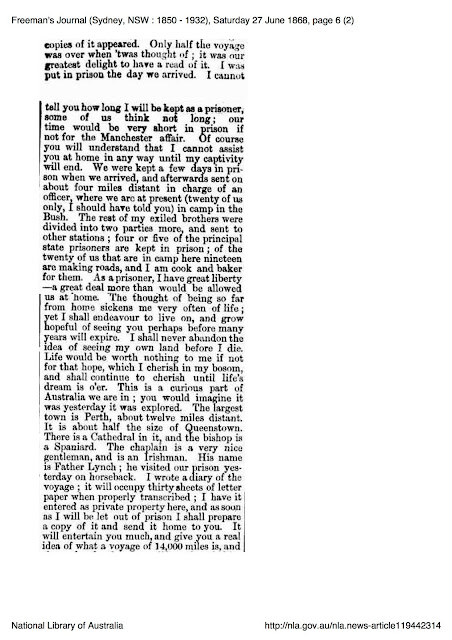 and another... copies of these letters were well circulated. 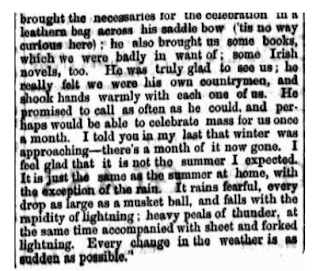 This is just a small portion of all that is available re convicts transported to Western Australia... for further reading... 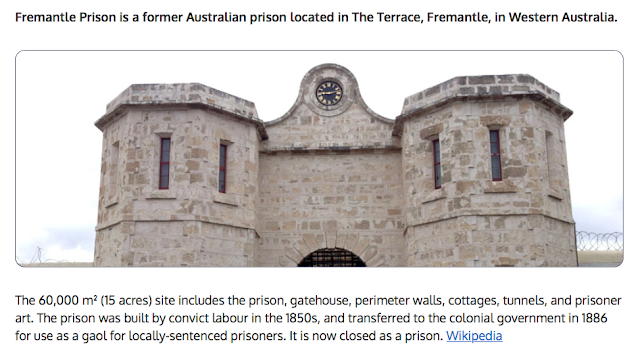 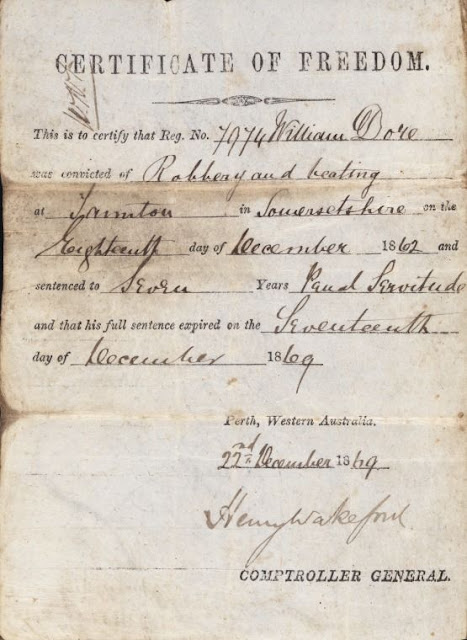 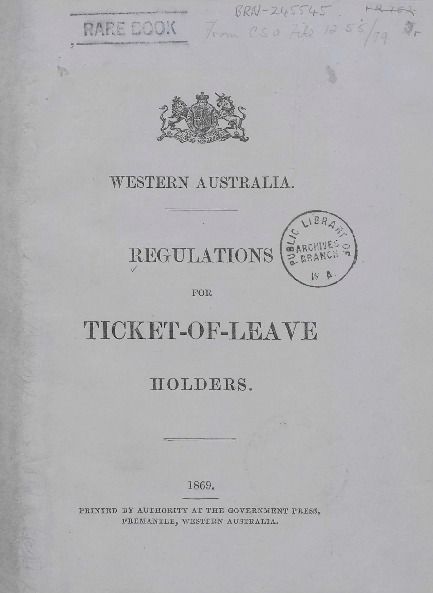 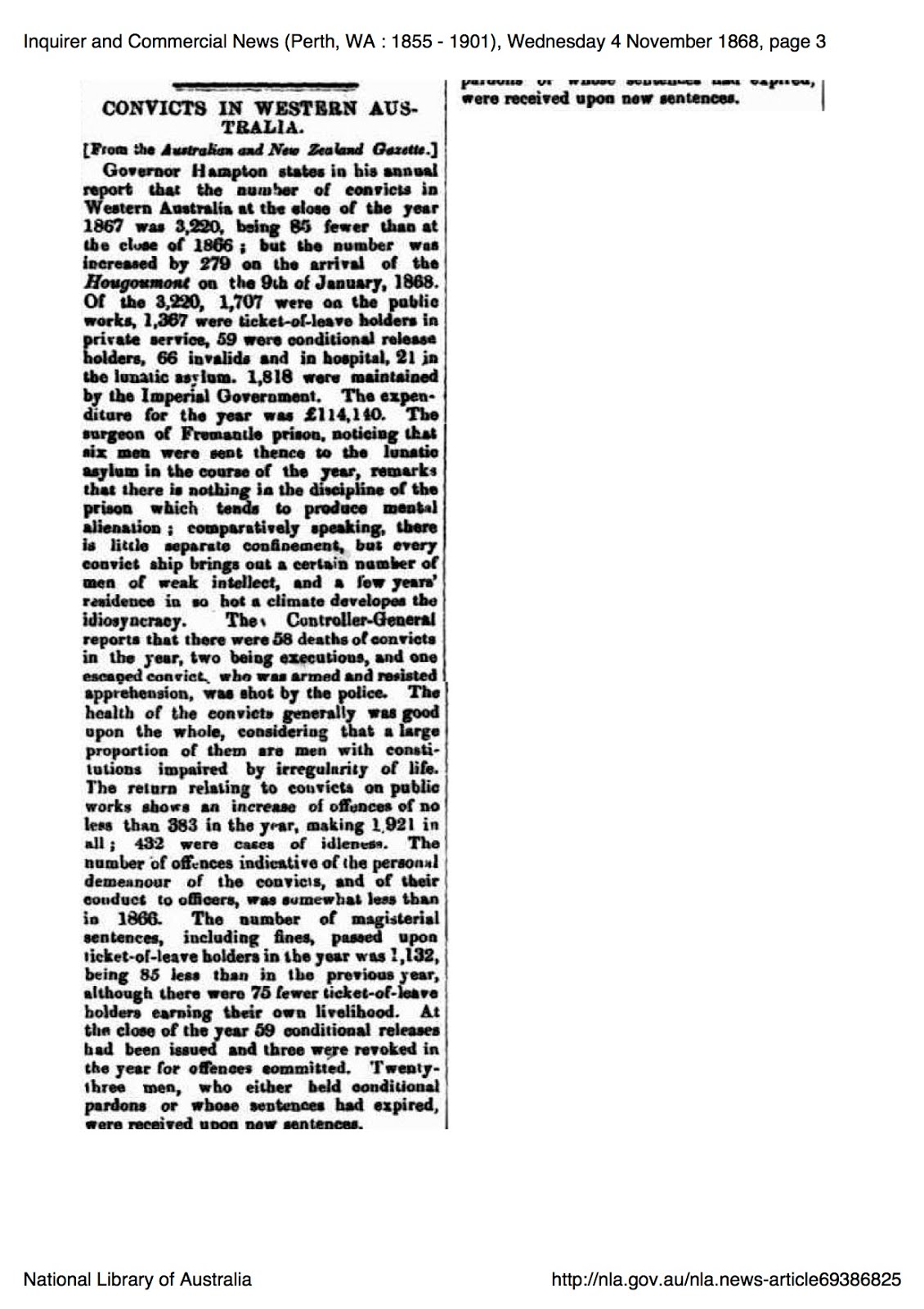 This was to be the final lot of convicts sent to Western Australia... 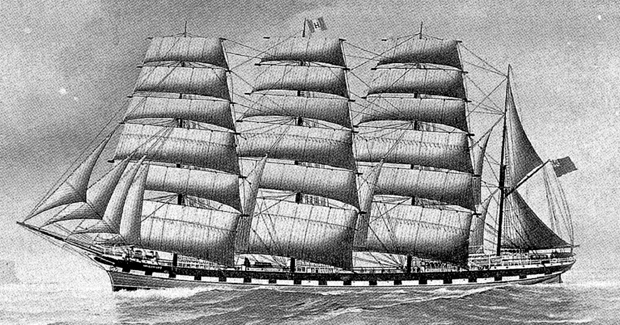