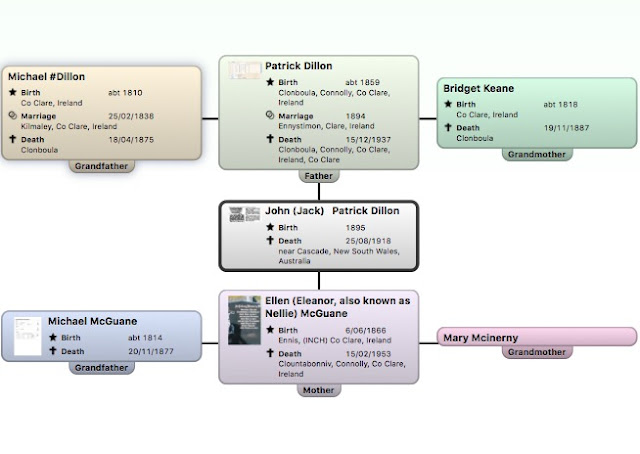 I have heard various stories about him, some maybe a little far fetched, but with the help of TROVE, our wonderful digitised media site, I have learnt a bit more.

I knew he died young from family stories, I knew he worked felling trees, but I knew little else. One of his brothers, my Great Uncle Martin told me two stories about him... one that he had a brush with notoriety....

and the other was that he had won a lottery and was returning home, after celebrating at the pub, when he was robbed. I had dismissed this story, as none of my family had heard it. I thought perhaps it was just a tall tale... however, I have just found a notice in TROVE which gives at least a little credence to the story...

No mention of a lottery win, but I wonder... As I read this item for the first time, I had a very strange feeling, as if I was meant to find that just now. I felt that somehow, I at last had a connection to a Great Uncle I never knew.

From news 'back home', John loved Australia and planned his future here, hoping that more of his eleven siblings would also emigrate. Michael was here originally, followed by Molly (Mary), then John. Later, Bridget, my grandmother, would also settle in Australia, but by then, John had died as a result of an accident. 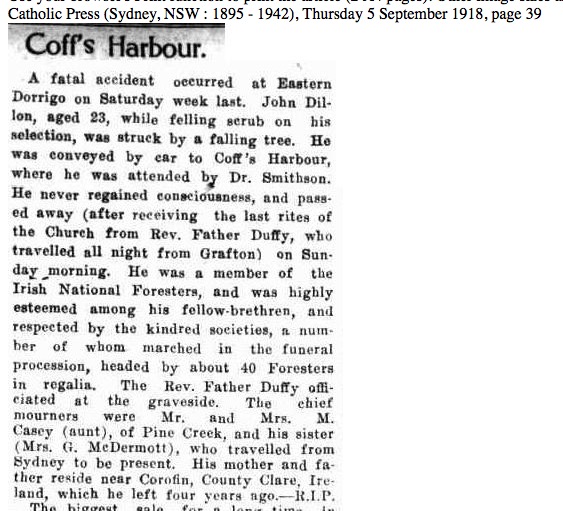 Mrs. G. McDermott as mentioned was his widowed sister, Molly (Mary), who had been married to Edward Gerard McDermott, known as Gerard, about July 1917. Sadly, Gerard was killed in WW1 in April, 1918, then just five months later, Molly was to lose her oldest brother.

John is buried in an unmarked grave in the Catholic section of the Coffs Harbour cemetery.

As well as finding the notice of the robbery, I also found this Bereavement Notice.. as with the funeral notice, it has left me with another question to be answered ... who was the aunt, Mrs. M. Casey? Was she a Dillon, or perhaps a McGuane.. at least the Bereavement notice has defined which Pine Creek in NSW she lived, at Bonville, which is near Coffs Harbour.

There is a possibility that she was Mrs. Laura Annie Casey, wife of Michael and sister of John's mother, Ellen/Nellie McGuane... still to verify. If so, that's a whole lot further than I have had on the McGuanes previously... this story remains unfinished.

Though I never knew my Grandmother, Bridget, as she died when my Mother was just eleven, I did know and love her sister, Molly.. Aunt Molly was such a warm and loving person, with a wicked sense of humour. My mother and her sisters told me that she and my grandmother were very much alike.  Though we only knew each other through years of letter writing, I also became very fond of Great Uncle Martin... and his sister, Helen, who married Michael Maloney, as we also wrote to each other. They have all passed now. I did get to meet a daughter of another of the siblings, Susie, when we went to New Zealand. When Cath opened the door to us, not knowing we were even coming, she hugged me before I could introduce myself.. and knew straight away that I was Peggy's daughter.. She had met Mum, Dad and my youngest brother some years before. I am rarely told that I look anything like my mother, so that was a surprise. As for her, she was so much like Mum's sister, Betty, that I was taken aback... even more so when we were invited in, as her house was decorated in the same colours and a similar style...strange how there was such similarity and yet they had never met either. Family ties run deep.