100 years ago,
New Year's Eve
was celebrated in slightly different ways,
but has anything really changed? 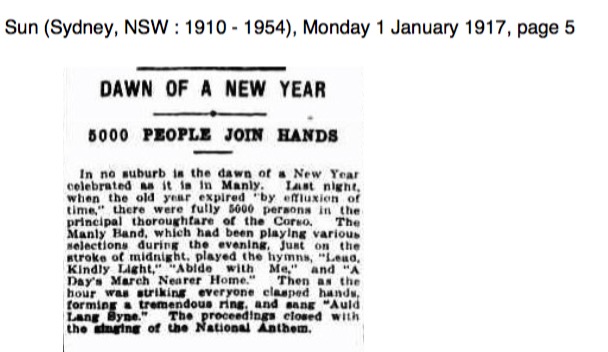 " In no suburb is the dawn a New Year celebrated as it is in Manly. Last night, when the old year expired "by effluxion of time", there were fully 5000 persons in the principal thoroughfare of the Corso. The Manly Band, which had been playing various selections during the evening, just on the stroke of midnight, played the hymns, "Lead Kindly Light", "Abide With Me", and "A Day's March Nearer Home". Then as the hour was striking everyone clasped hands, forming a tremendous ring, and sang "Auld Lang Syne". The proceedings closed with the singing of the National Anthem.

The passing away of the old year and the dawn of 1917 were celebrated without any display of hilarity, New Year's Eve falling on a Sunday. Following an old custom, watchnight services were held in several of the city churches. A good many people remained astir until the midnight hour had struck, and the new year was ushered in by the exchange of good wishes for a happy and prosperous new year. 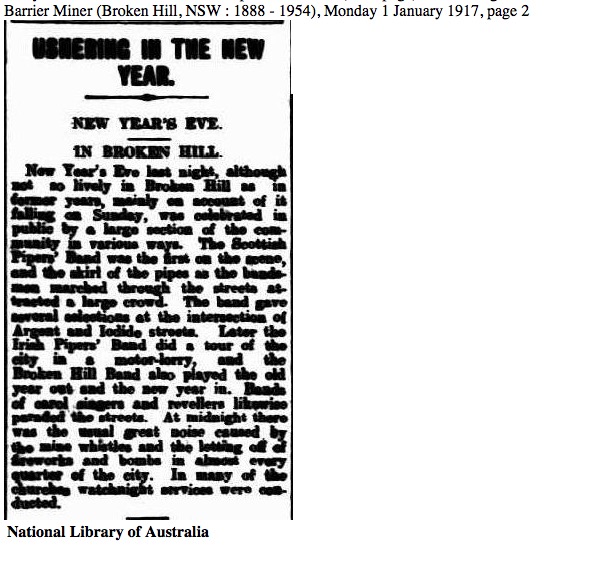 USHERING IN THE NEW
YEAR.
NEW YEAR'S EVE.
IN BROKEN HILL.
New Year's Eve last night, although
not so lively in Broken Hill as in
former years, mainly on account of it
falling on Sunday, was celebrated in
public by a large section of the com-
munity in various ways. The Scottish
Piper's Band was the first on the scene,
and the skirl of the pipes as the bands-
men marched through the streets at-
tracted a large crowd. The band gave
several selections at the intersection of
Argent and Lodide streets. Later the
Irish Pipers' Band did a tour of the
city in a motor-lorry, and the
Broken Hill Band also played the old
year out-and the new year in. Bands
of carol singers and revellers likewise
paraded the streets. At midnight there
was the usual great noise caused by
the mine whistles and the letting off of
fireworks and bombs in almost every
quarter of the city. In many of the
churches watchnight services were conducted. 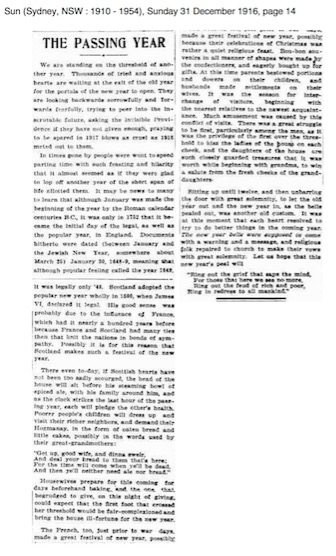 THE PASSING YEAR
We are standing on the threshold of another
year. Thousands of tired and anxious
hearts are waiting at the exit of the old year
for the portals of the new year to open. They
are looking backwards sorrowfully and for-
wards fearfully, trying to peer Into the in
scrutable future, asking the invisible. Provi
dence if they have not given enough, praying
to be spared in 1917 blows as cruel as 1916
meted out to them.
In times gone by people were wont to speed
parting time with such feasting and hilarity
that it almost seemed as if they were glad
to lop off another year of the short, span of
life allotted them. It may be news to many
to learn that although January was made the
beginning of the year by the Roman calendar
centuries B.C., it was only in 1752 that it be-
came the initial day of the legal, as well as
the popular year, in England. Documents
hitherto were dated (between January and
the Jewish New Year, somewhere about
March 25) January 30, 1648-9, meaning that
although popular feeling called the year 1649,
it was legally only '48. Scotland adopted the
popular new year wholly in 1600, when James
VI declared it legal. His good sense was
probably, due to the Influence of France,
which, had it nearly a hundred years before
because France and Scotland had many ties
then that knit the nations in bonds of sym
pathy. Possibly it is for this reason that
Scotland makes suclr a festival of the new
year. . . .
There even to-day, If Scottish hearts have
not been too sadly scourged, the head of the
house will sit before his steaming bowl of
spiced ale, with his family, around him, and
as the clock strikes the last hour of the pass
ing year, each will pledge the other's health.
Poorer people's children will dress up and
visit their richer neighbors, and demand their
Hogmanay, in the form of oaten bread and
little cakes, possibly in the words , used by
their great-grandmothers:
"Get up, good wife, and dinna sweir,
And deal your bread to them that's here;
For the time will come when ye'll be dead.
And then ye'll neither need ale nor bread."
Housewives prepare for this coming for
days beforehand baking "and the one that
begrudged to give, on this night of giving,
could expect that the first foot that crossed
her threshold would be fair-complexloned and
bring the house ill-fortune for the new year.
The French, too, just prior to war days,
made a great festival of new year, possibly;
because their celebrations of Christmas was
rather a quiet religious feast. Bon-bon sou
venirs in all manner of shapes were made by
the confectioners, and eagerly bought up for
gifts. At this time parents bestowed portions
and dowers on their children, 'and
husbands made settlements on their
wives. It was the season for inter
change of visitors, beginning with
the nearest relatives to the newest acquaint
ance. Much amusement was caused by this
conflict of visits. There was a great struggle
to be first, particularly among the men, as it
was the privilege of the first over the thres-
hold to kiss the ladles of the house on each
cheek, and the daughters of the house are
such closely guarded treasures that it was
worth while beginning with grandma, to win
a salute from the fresh cheeks of the grand
daughters.
Sitting up until twelve, and then unbarring
the door with great solemnity, to let the old
year out and the new year in, as the bells
pealed out, was another old custom. It was
at this moment that each heart resolved to
try to do better things in the coming year.
The new year bells were supposed to come
with a warning and a message, and religious
folk repaired to church to make their vows
with great solemnity. Let us hope that this
new year's peal will
Fix this text"Ring out the grief that saps the mind,
For those that here we see no more.
Ring out the feud of rich and poor, .
Ring in redress to all mankind." 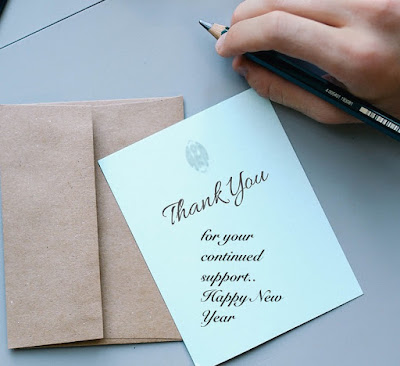