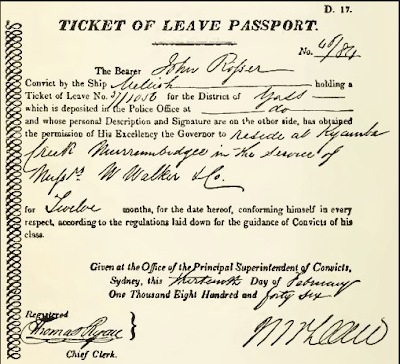 From Issue 1, we know that Certificates of Freedom and Tickets of Leave were very similar.

TICKETS OF LEAVE... from the National Library of Australia

A ticket of leave allowed convicts to work for themselves provided that they remained in a specified area, reported regularly to local authorities and attended divine worship every Sunday, if possible. They could not leave the colony.

CERTIFICATE OF FREEDOM... from the National Library of Australia

A certificate of freedom was issued at the completion of a convict's sentence, as proof he/she was a free person. They were free to travel anywhere, and could return to the United Kingdom (if they could afford it!).

Tickets of Leave also varied.. above is a Ticket of Leave Passport, dated thirteenth of February, 1846. 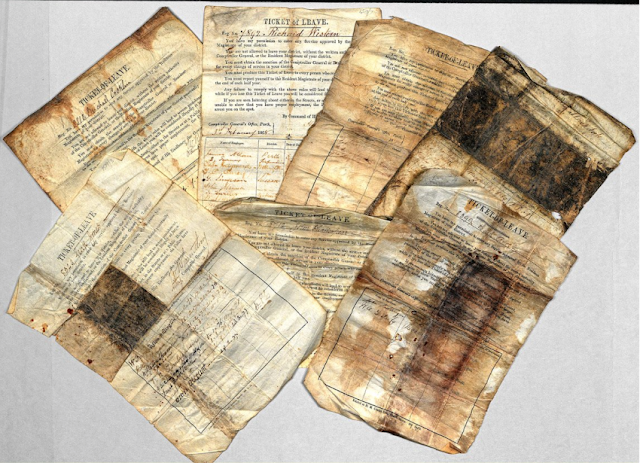 These are different versions, courtesy of AMW,
Australian Memory of the World | Imagine a world without memories

They show signs of being carried for some time. Convicts had to carry their paperwork with them always. If you are researching a convict, then you can search the Indexes at the State Archives, New South Wales. Tickets of Leave, 1810-75

You can then request a copy via the link provided there. That will partially fill out an email for you. The cost varies according to how much information is available. However, do a search first, as you may find a copy elsewhere...do respect copyright.

In 1843, a fee was introduced.. when changing from one district to another or for a replacement. You can see why the old and sometimes tattered papers were held on to. This would have been a great impost on the average person. Perhaps the lucky ones who had found work in different districts may have been able to have this fee paid for them by their new employer, no doubt it still would have to have been paid back over time.

Tue 17 Jan 1843 - New South Wales Government Gazette (Sydney, NSW : 1832 - 1900) Page 91 - TICKETS OF LEAVE AND CERTIFICATES OF FREEDOM.
Colonial Secretary's Office,
Sydney, 12th January, 1843.
TICKETS OF LEAVE
AND
CERTIFICATES OF FREEDOM.
HIS Excellency the Governor directs it to be notified, that a Fee of Two shillings and six
pence will henceforth be charged at the Office of the Principal Superintendent of Convicts, whenever the holder of a Ticket of Leave is allowed, for his own convenience, to have his Ticket changed from one District to another. 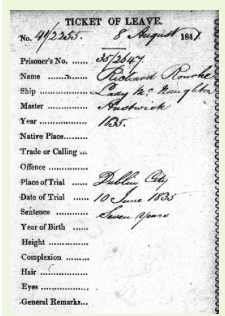 His Excellency also directs it to be notified, that parties who may require to have their original Certificates of Freedom renewed, in consequence of being mutilated or otherwise defaced, will be required to pay the same Fee of Two shillings and six-pence at
the Office of the Principal Superintendent of Convicts. By His Excellency's Command,
E. DEAS THOMSON.

Some more lists.. there are quite a number available... you can search TROVE by date or name, most are listed as Certificates of Freedom, some by Tickets of Leave.. and both can be found in newspapers and/or Government Gazettes. 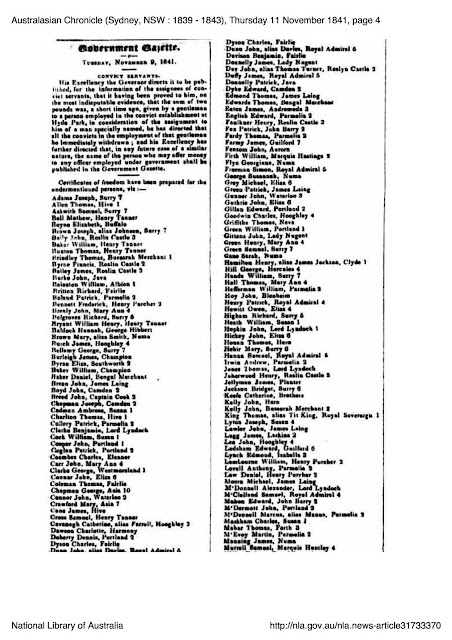 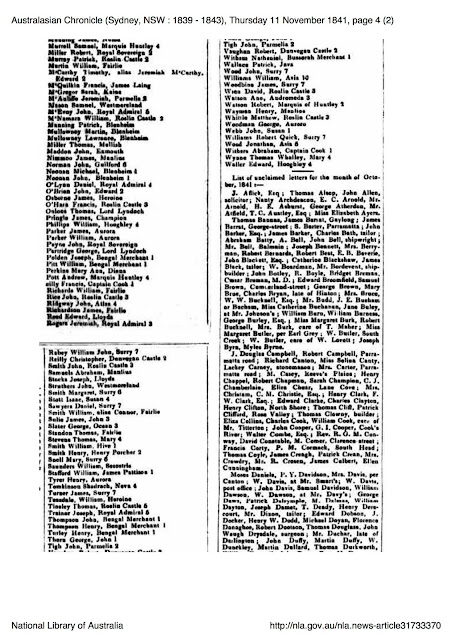 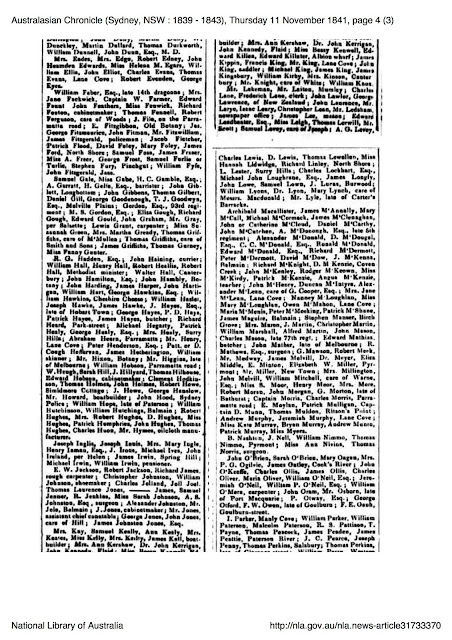 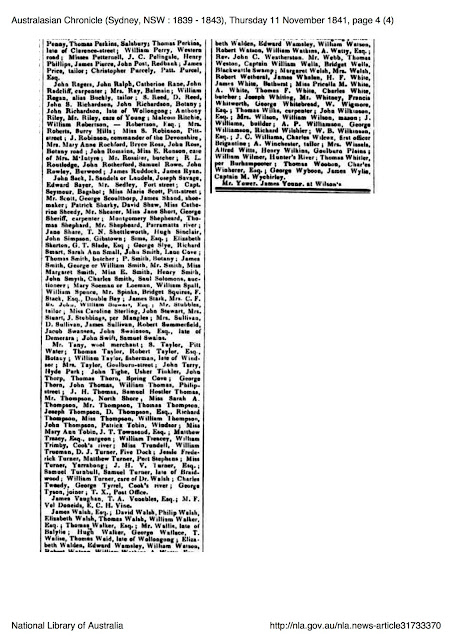 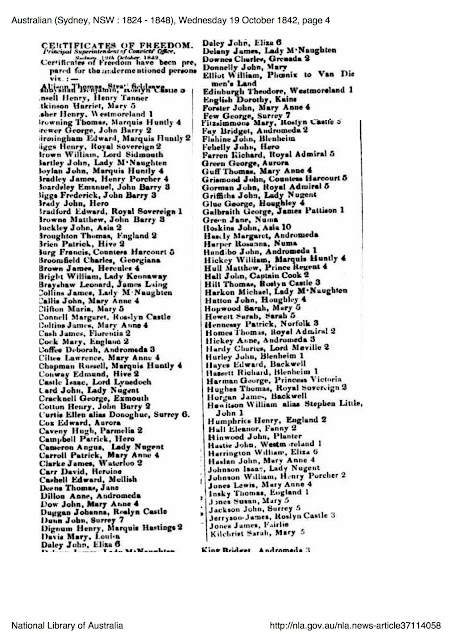 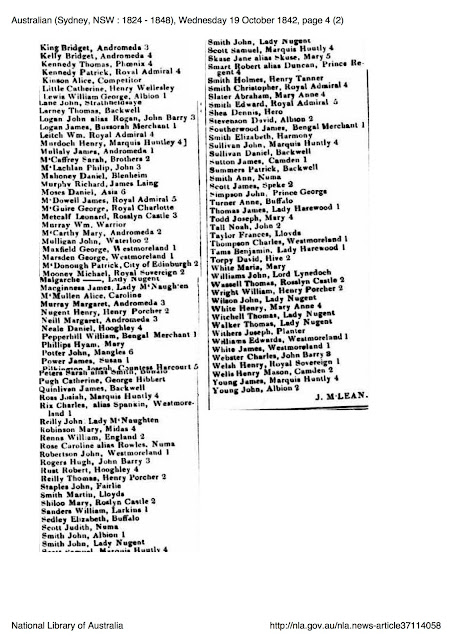 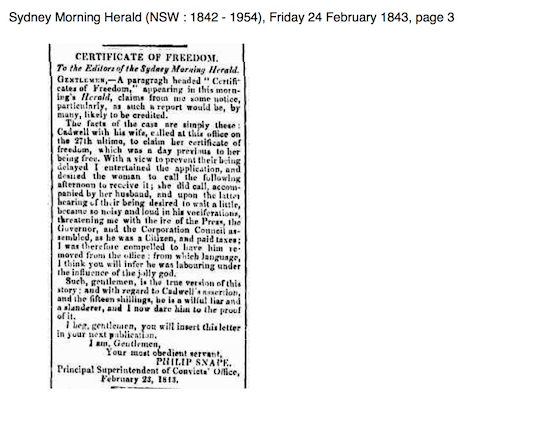 CERTIFICATE OF FREEDOM
To the editors of the Sydney Morning Herald.
GENTLEMEN - A paragraph headed "Certificates of Freedom" appearing in this morning's Herald, claims from me some notice, particularly, as such a report would be, by many, likely to be credited.

The facts of the case are simply these: Calwell with is wife, called at this office on the 27th ultimo, to claim her certificate of freedom, which was a day previous to her being free. With a view to prevent their being delayed I entertained the application, and desired the woman to call the following afternoon to receive it; she did call, accompanied by her husband, and upon the latter hearing of their being desired to wait a little, became so loud in his vociferations, threatening me with the ire of the Press, the Governor, and the Corporation Council assembled, as was a Citizen, and paid taxes; I was therefore compelled to have him removed from the office; from which language, I think you will infer he was labouring under the influence of the jolly god.
Such, gentleman, is the true version of this story; and with Caldwell's assertion and the fifteen shillings, he is a wilful liar and a slanderer, and I dare him now to to the proof of it.
I beg, gentleman, you will insert this letter in your next publication.
I am, Gentlemen,
Your most obedient servant
PHILIP SNAPE
Principal Superintendent of Convict's Office,
February 23, 1843

I found this interesting in that it lists the date that Certicates of Freedom would be granted, also the ship that the convicts listed, were transported on. 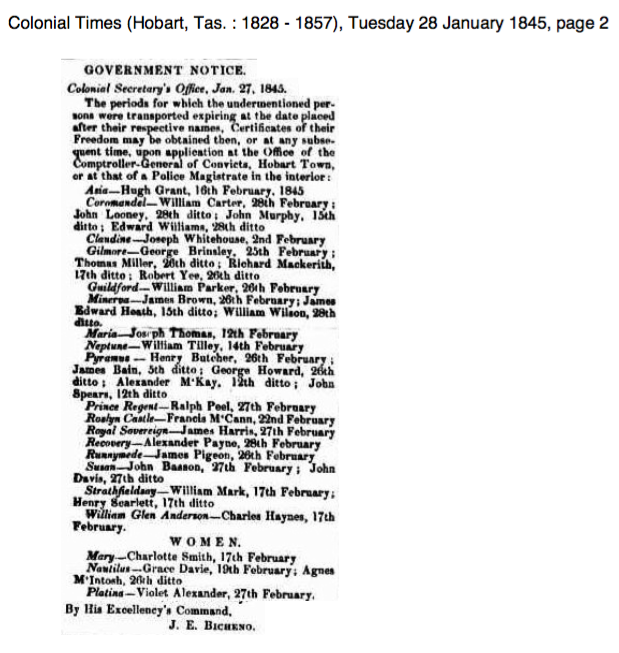 There are many websites that concern Tickets of Leave, Certificates of Freedom.. including most State Archives, National Library of Australia and State Libraries, also Wikipedia.