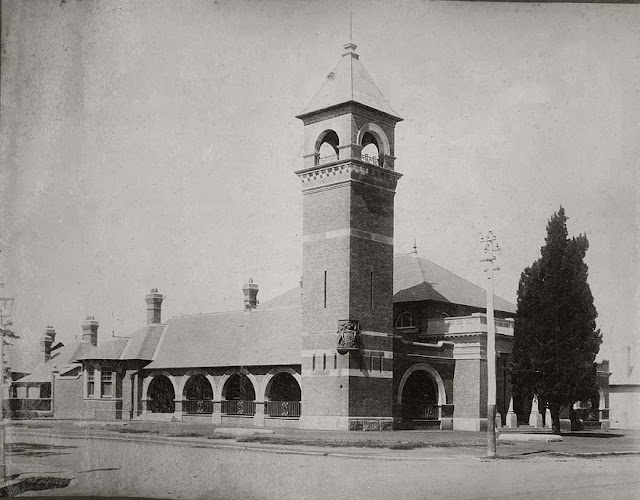 How could I pass on on some of the funniest, most intriguing and yes, sometimes, horrifying, items that appeared in the press back in 1838.


An interesting byline.. (From the Australian of yesterday.)

Here we have inquests being held in public houses.. the Bunch of Grapes, then another, an extremely sad case, at the Royal Oak. When reading these cases, we must remember that times and attitudes were so different than, and there was little help for many. 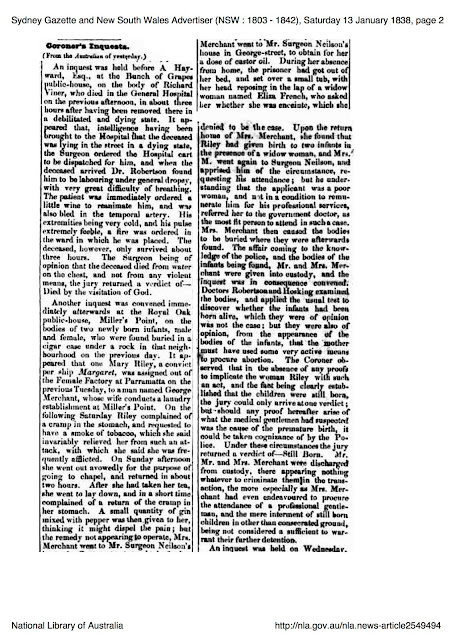 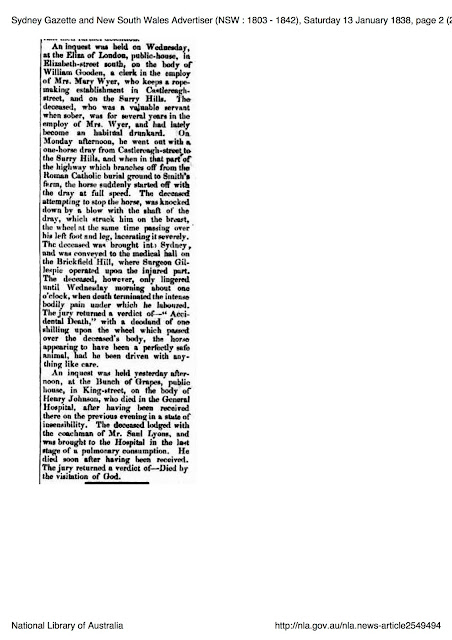 I came across this while looking for more information on the public house, "Bunch Of Grapes", in Sydney, not to be confused with a current pub at Ballarat .

This was written in RootswebArchives by the late Lesley Euebel, whose passion was the study of convicts and early colonial history.. I thought it too good to ignore..


Hi all,
I have an interesting book called "Inns of Australia" by Paul McGuire - my
edition was published in 1912.

When Macquarie arrived to end the Military Junta’s reign, there were
seventy-five licences in Sydney alone.

Macquarie order that they be reduced to twenty. One was to be given on the road
to Parramatta; three in Parramatta; one on the road beyond it to the Hawkesbury;
and six at Windsor and thereabouts.

Macquarie cut at the shanty trade and illicit stills. He encouraged reputable
publicans to improve their premises. He persuaded the British Government to a
reasonable duty on spirits and an unrestricted import, to discourage
moonshiners. He won leave for a distillery to take up the grain surplus on
occasion.

Through most of the Macquarie reign, rum continued as a powerful element of the
economy.

When John O’Hearne contracted in 1812 to restore the stone bridge over the Tank
Stream near the Cove, he was paid with 660 gallons of rum and a bonus of 15
gallons for good workmanship. Doubtless his profit was sufficient. Australia’s
coal sold in India for Bengal rum. And Sydney’s Hospital (which came to house
the Parliament) was built by Riley, Blaxcell and D’Arcy Wentworth in return for
the necessary labour and a permit to import 45,000 gallons of rum.

Forty nine public houses and their licensees are named in the Sydney Gazette of
April 19, 1817, thirty one in Sydney and eighteen out of town.

We have not been able to find a single survivor by site and title in modern
Sydney. Sydney has significantly been less tenacious than Melbourne and Adelaide
of the old names.

Inn names and signs are fascinating themes for the connoisseur of social
history. Most of ours were brought from Britain; though we recall S. B.’s brave
local note of The Three Jolly Settlers.

The antipodean scene suggested The Macquarie Arms, The Governor King, The New
Zealander and probably The Windmill; while out of town appeared The Hawkesbury
Settler, with The First and Last at Castlereagh marking for a time the
frontiers of settlement.

Other signs have echoes of antiquity, The Seven Stars may have derived from
Manchester’s inn licensed under Edward III. The New Inn had one of the oldest of
titles; there were New Inns, no doubt in Thebes and Babylon and Tyre.

The Lord Nelson and Nelson’s Victory recalled recent glories; the Duke of
Wellington had to wait another year or two for his Sydney honours.


Another place mentioned regularly in the clippings I collected was the Female Factory at Parramatta. 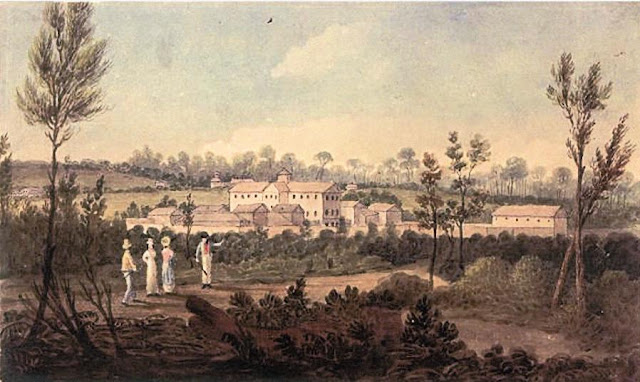 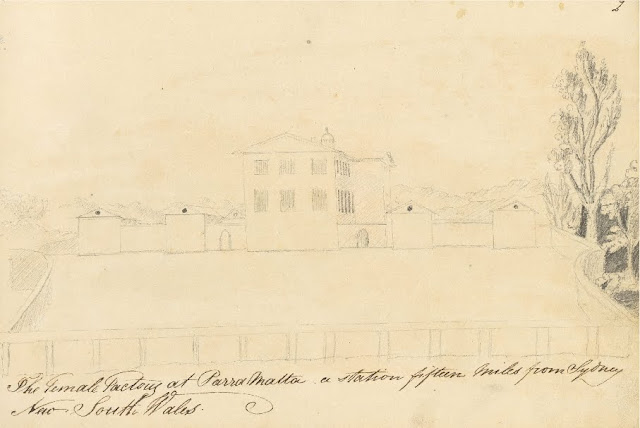 
NEWS OF THE DAY presented a variety of interesting topics...from the purchase of a lease of a theatre, to 'an information' laid against a Mess-Sergeant for selling spirits without a licence.. a whole glass of rum to a number of people..on to the foundation of a Cathedral, then straight into a convict who absconded...

No headlines, a veritable mish mash of news, enticing the reader to read on to the next exciting story.

Note the mention of another public house named in Lesley Eubel's post above. 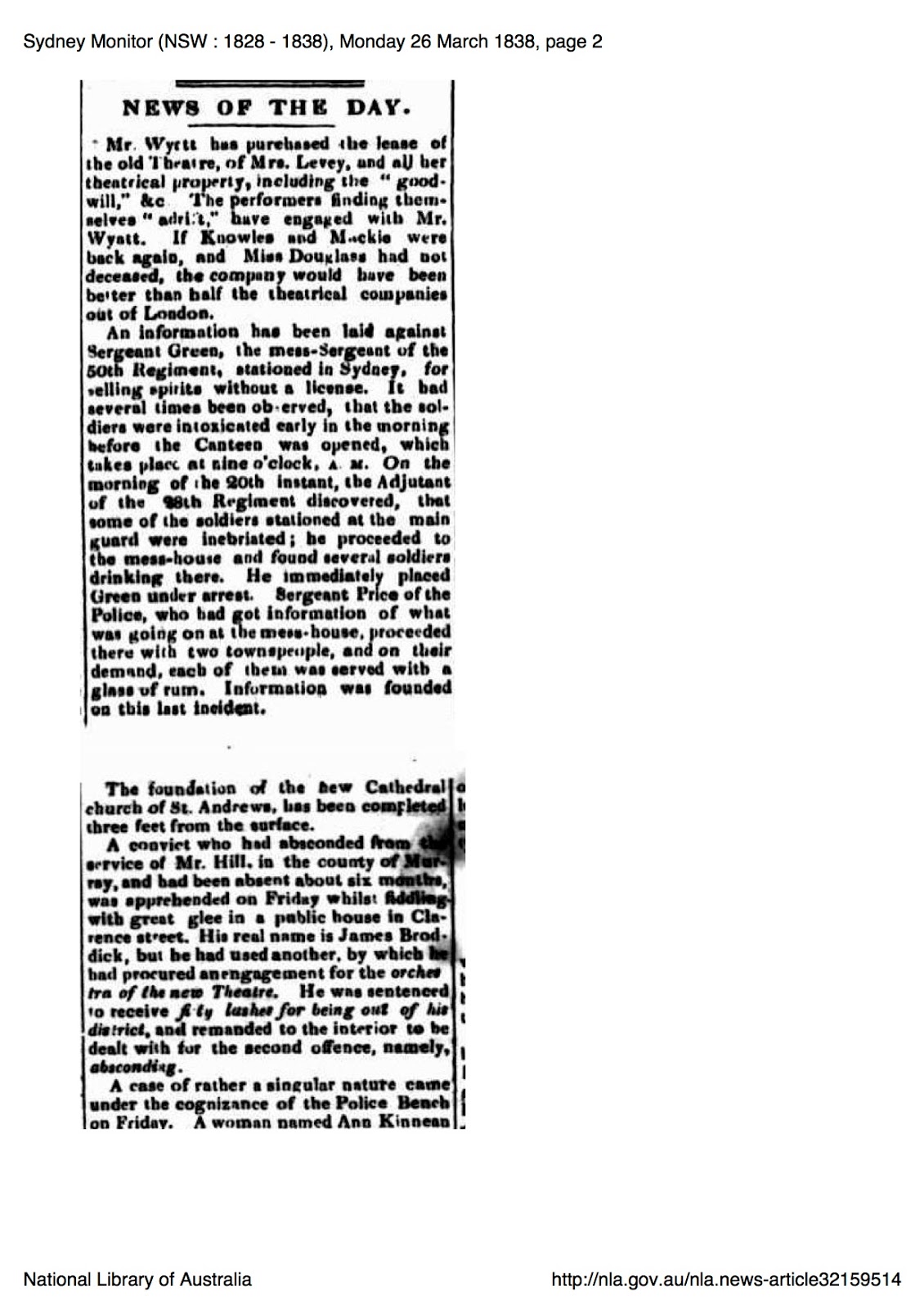 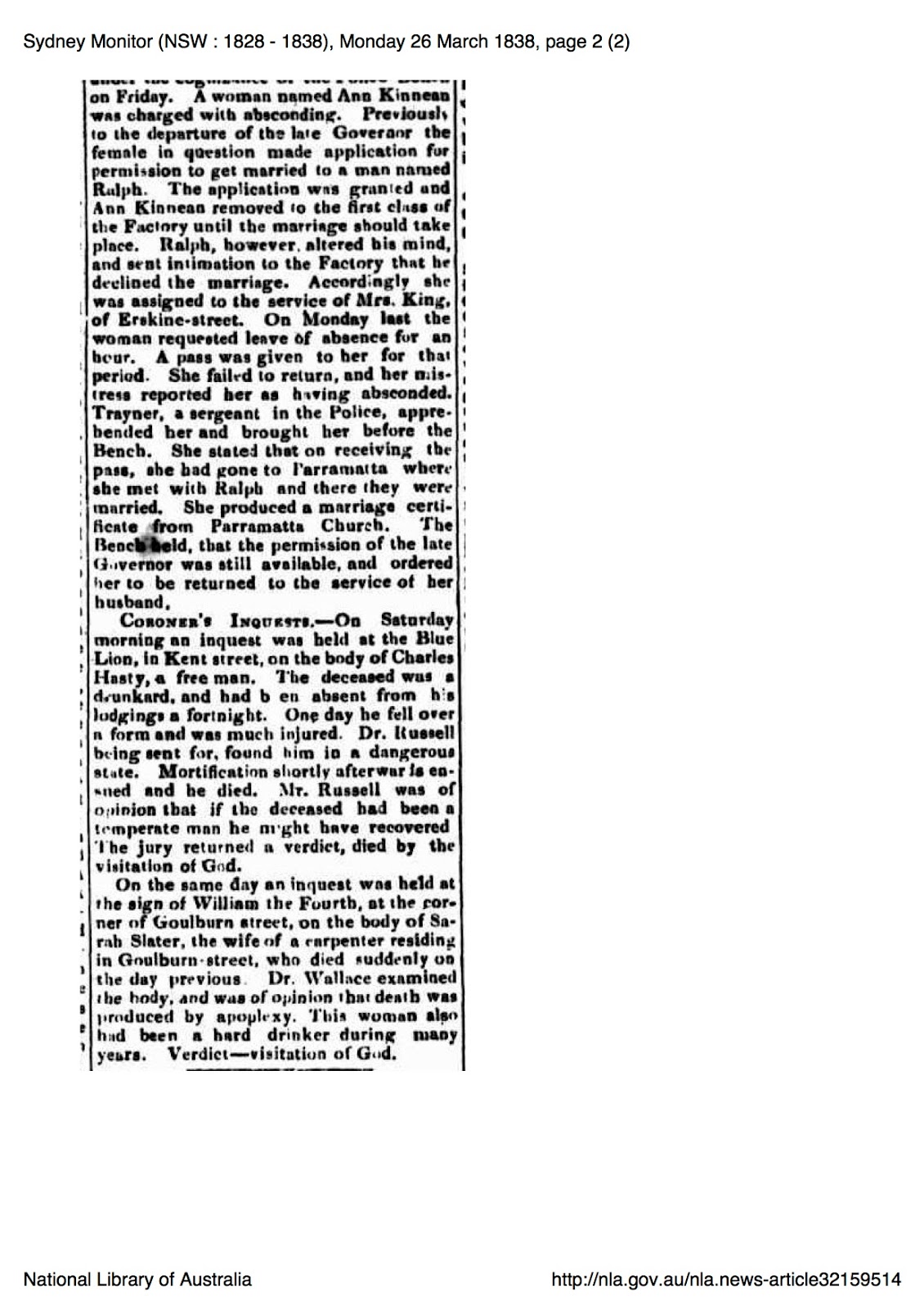 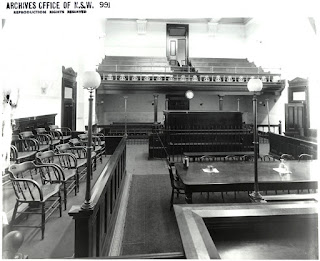 
The courts of quarter sessions or quarter sessions were local courts traditionally held at four set times each year in the Kingdom of England (including Wales) from 1388 until 1707, then in 18th-century Great Britain, in the later United Kingdom, and in other dominions of the British Empire.

The jurisdiction of the court of Quarter Sessions ranged far and wide.

Here we see a woman.Mary Ann Gilbethorne, sent to the Parramatta Female Factory for what was termed petty larceny, yet attracted a 12 month sentence of work, with the first fortnight to be kept in solitary confinement. I wonder what on earth she did to attract such a severe sentence.

This was followed by a dubious charge of theft against three men... (enlarge the clipping to read of the outcome)

It seems stealing featured heavily in this Quarter Session..how do you think the sentences of that time compare to the sentences we read about today? 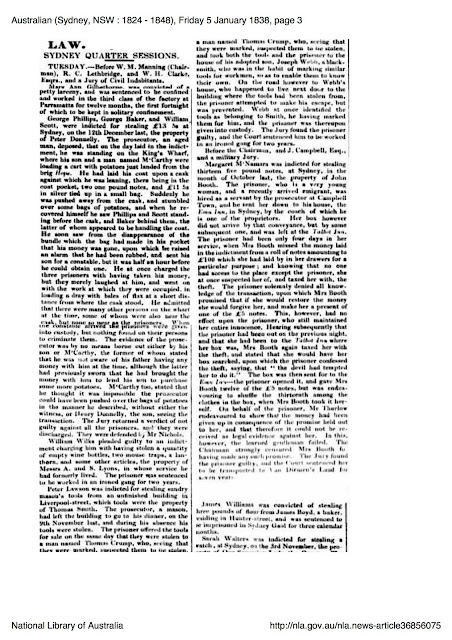 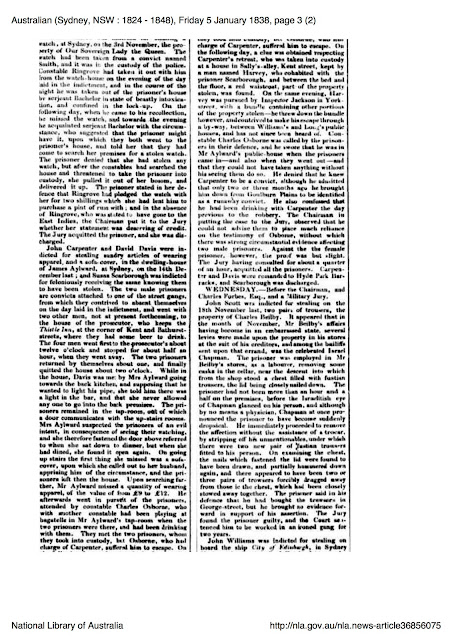 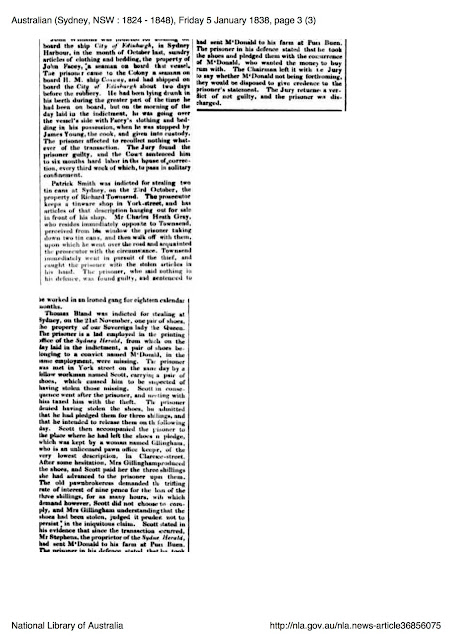 This is a publication I don't recall coming across previously. I daresay that the editor of this journal fancied himself as somewhat of a humorist.. or maybe he didn't intend to be as lighthearted as he often appears to be.. I'll let you judge for your self.


We wander through a theatre review straight into a burglary. 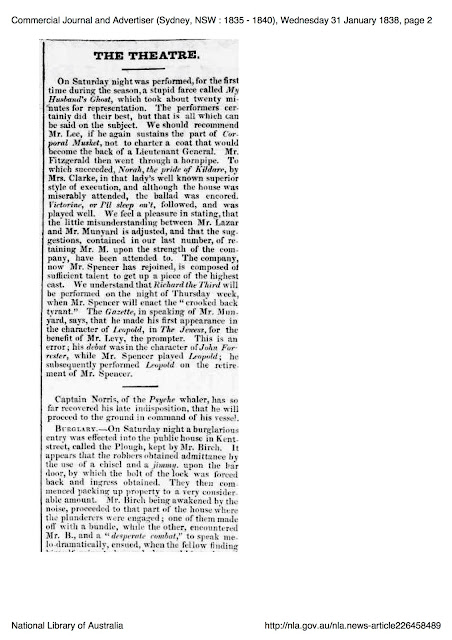 then street robbery, assault, then a strange comment about a cast being taken of.. well, I'll let you find that.

A weather report happily precedes an item re a man stabbing his wife.. 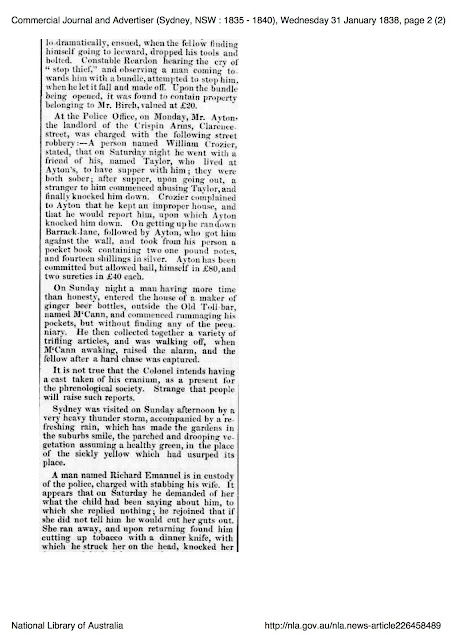 .. and this must surely be one of the most unfortunate conmen around.. he should have chosen his target more carefully.

I do like the description that a servant bestowed on himself...I'm sure he was all that and more. That caused nearly as many smiles as a dancing cow. 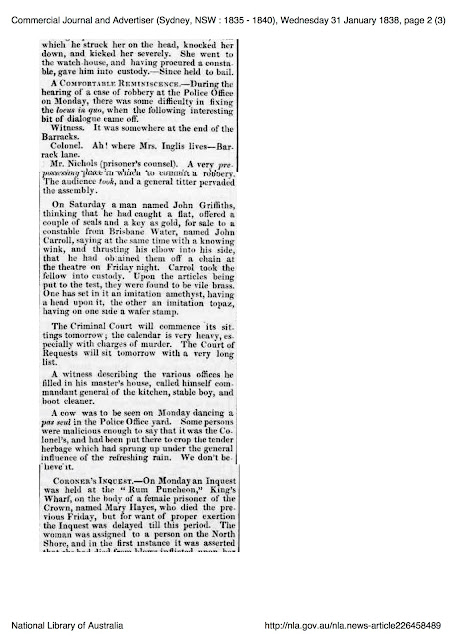 Let's finish with a somewhat judgemental Letter to the Editor, signed, it seemed, with a Nom de Plume.. 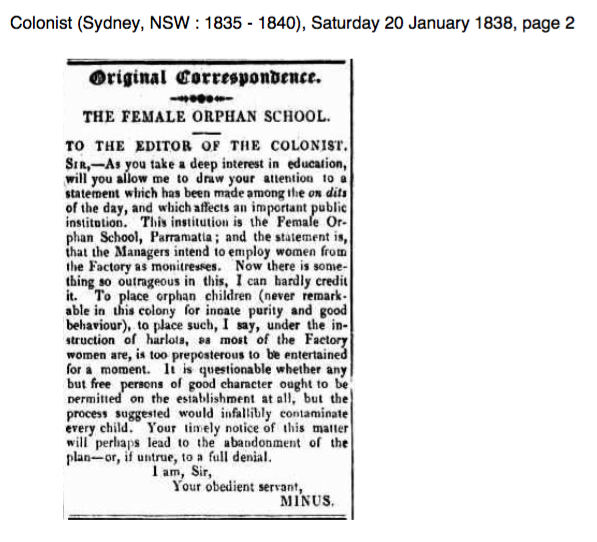 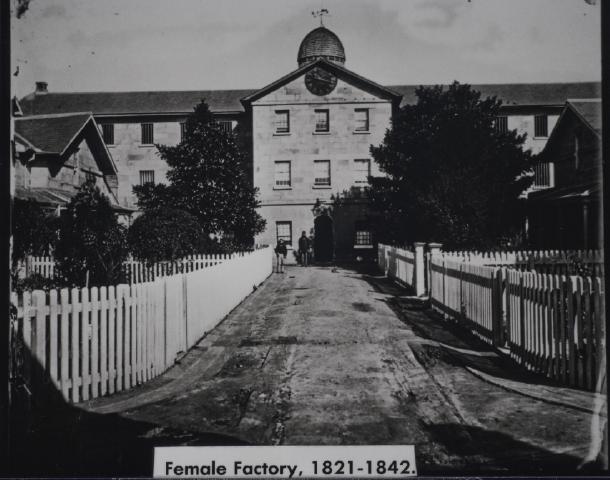 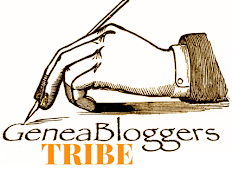 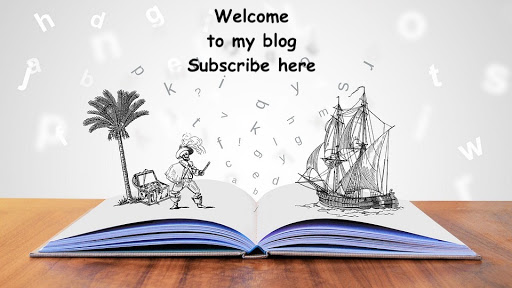