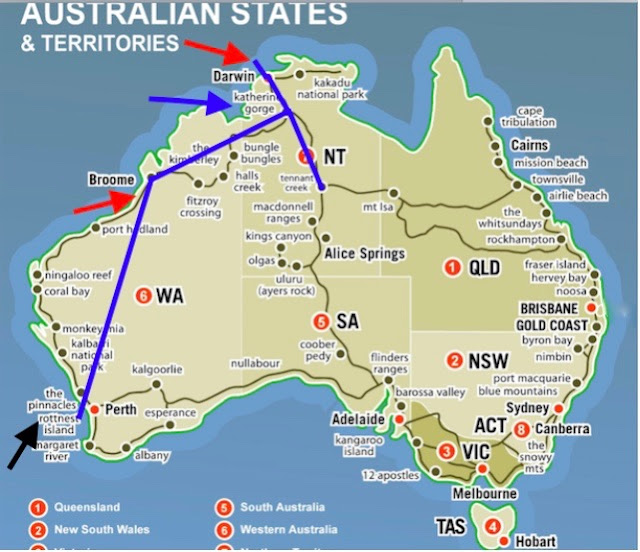 Ever wanted to circumnavigate Australia? We still have a way to go...we'll be going on quite a journey, at least virtually, and clockwise. So as to make sure all states and territories are covered, we started in Western Australia and explored a little of the early history of a small part of this massive state via TROVE... 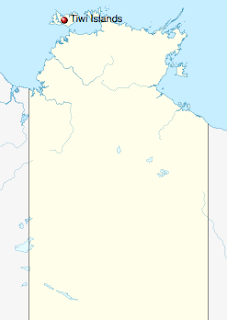 We're heading north this week...still in the Northern Territory up to Darwin, but only to catch a small plane to the Tiwi islands. We could go by boat, but we have a lot of places to see over the coming weeks, so best to take the quickest route... Please accept the line as an estimate, this will give you a better idea ..

You can see a Guide to the beauty of the Tiwi Islands here where Jennifer Ennion describes them as follows.. "A unique part of Australia, the Tiwi Islands are an off-the-beaten track destination for intrepid travellers. The two main islands are Bathurst and Melville, and nine smaller, uninhabited islands. While there are minimal tourist facilities across the group, don't let this deter you from visiting; the islands are renowned for the excellent fishing opportunities and the locals are welcoming. Almost 90 per cent of residents are of Aboriginal descent and you can meet some of them on a range of cultural and wildlife tours." 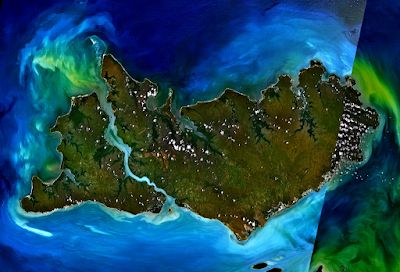 This image is in the public domain because it is a screenshot from NASA’s globe software World Wind using a public domain layer, such as Blue Marble, MODIS, Landsat, SRTM, USGS or GLOBE.

One of the earliest mentions I could find on TROVE was this item on Melville Island...rather than the full six pages, I have just posted the first two...you can click to enlarge. 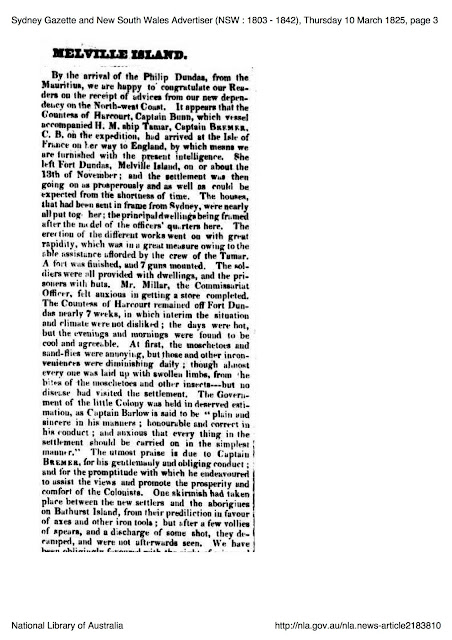 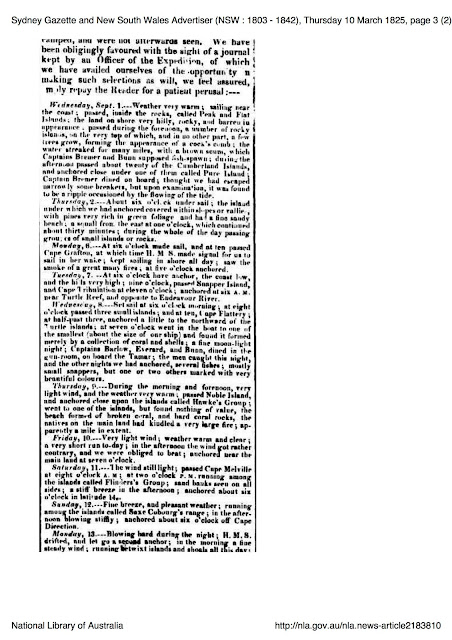 It is far easier to read  this version..Captain Bremer's eyewitness account... which was published in The Sydney Gazette and New South Wales Advertiser (NSW : 1803 - 1842) Saturday 1 April 1826
This is how he began it...

"About the time that this establishment was forming, a new settlement, by orders from home, was planted on Melville Island, at the northern extremity of New Holland, which, in a commercial point of view, as an intermediate station between the establishments of New South Wales mid Van Diemen's Land and the ports of India and China, is likely to become of great importance in the eastern world. It is in this neighbourhood that the annual fleet of Malay proas fish for the trepang or sea-slug, an article of great consumption in China, and sent chiefly to that market ; not, however, without passing through the hands of the Dutch, who beside laving high duties upon the article imported into their settlements fix an enormous advance on the prices of the goods given in exchange for it. This impolitic conduct will probably have the effect of driving the Malays to our new settlement of Fort Dundas, or Melville Island, where our merchants will treat with them on more liberal terms than they have been accustomed to at the Dutch settlements; and in this view we think it would be politic to allow these industrious people to establish themselves in the neighbourhood of their trepang fishery.
It has been said, that the Dutch feel annoyed at the formation of this new establishment so near to their own ; and the more so as they had themselves taken measures for anticipating us in the same quarter. We would not willingly impute to them such unworthy feelings ; for, without adverting to our ancient and only settlements on the island of Sumatra, which they know that we consented to transfer to them upon a plea totally unfounded in fact, they can scarcely have forgotten that we voluntarily surrendered to them every island in the great oriental archipelago, which the fate of war had wrested from them when in alliance with France, nor that to our generosity they are indebted for every foot of land which they now bold in the east."

This mentioned George Tollemache, who accompanied Capt., now Sir John Bremer on his expedition whereupon he took possession of a number of islands in the name of the Crown. 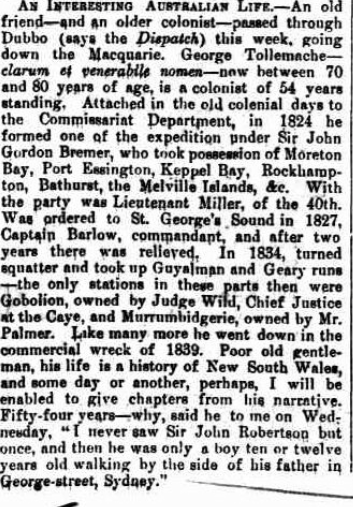 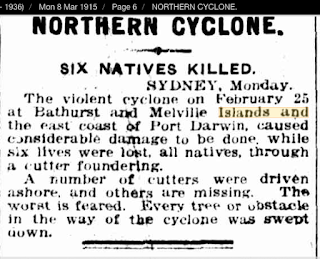 While the weather could be wonderful on these islands, it has often turned against them... as it did in 1915


The weather, the proximity to Darwin and the pearling industry around Thursday Island, the possibility of mining, etc. weren't the only reasons that attention was turned to the Tiwi Islands.

In 1928, the word's attention was focussing on this lady, Mrs. Keith Miller, Jessie Maude, known as "Chubbie".. the first woman to fly from England to Australia...and her route just happened to be over the Tiwi Islands.  There are many stories about her exploits, both in the air and on land..
Google is your friend. You could start here...
Jessie Miller - Wikipedia 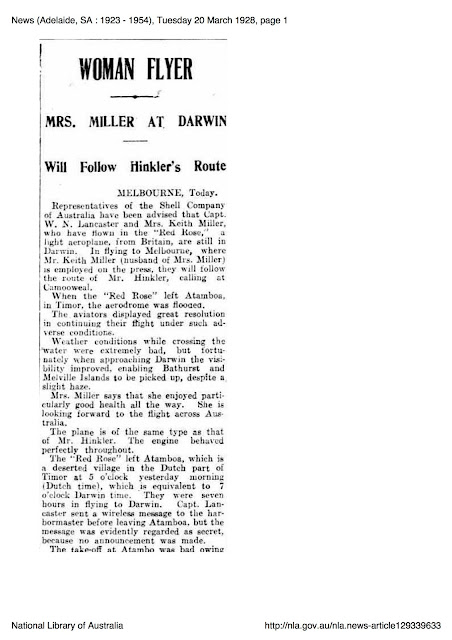 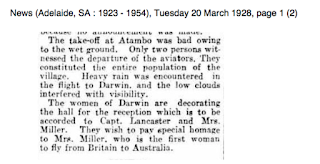 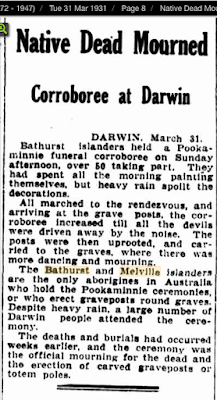 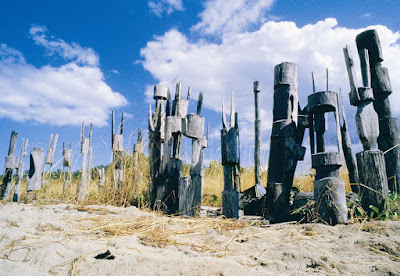 Pearling, as mentioned earlier, was a growing industry, as it was in Broome... where there's many, there's greed.

As the population of the islands stayed predominantly aboriginal, anthropologists were interested in the culture and way of life of this race that little was known of. 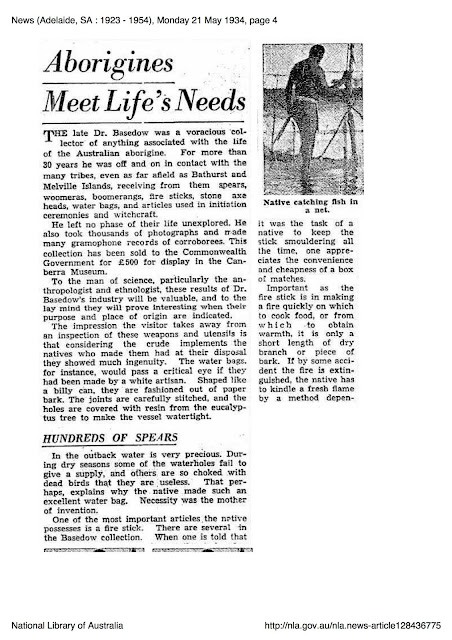 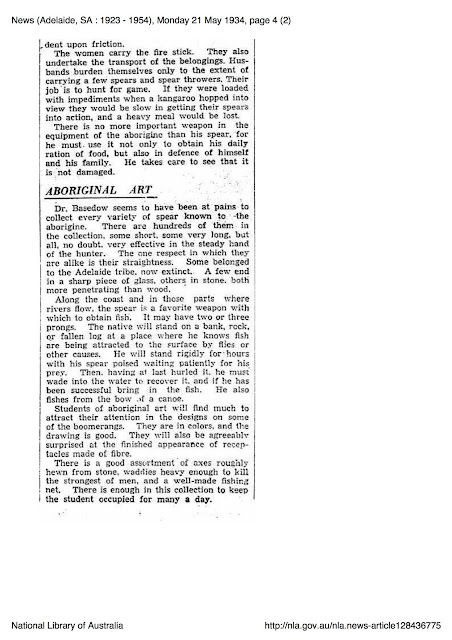 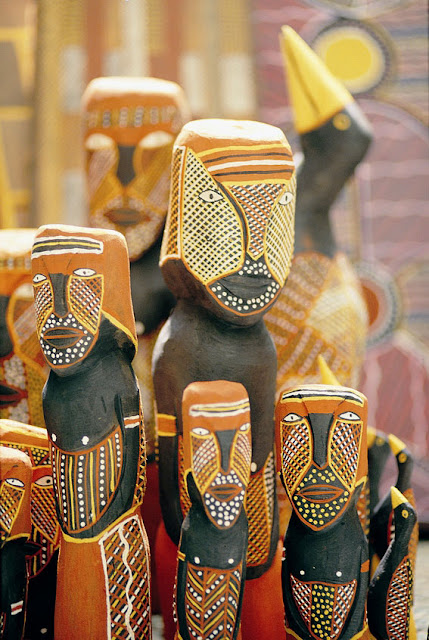 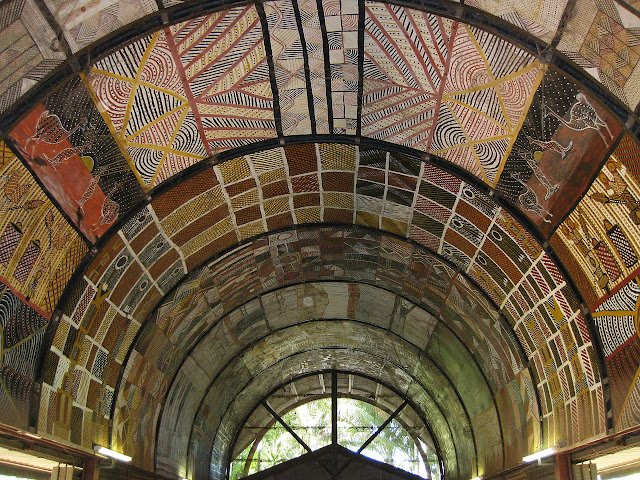 I wonder if the "Big Boss" appreciated the message ... 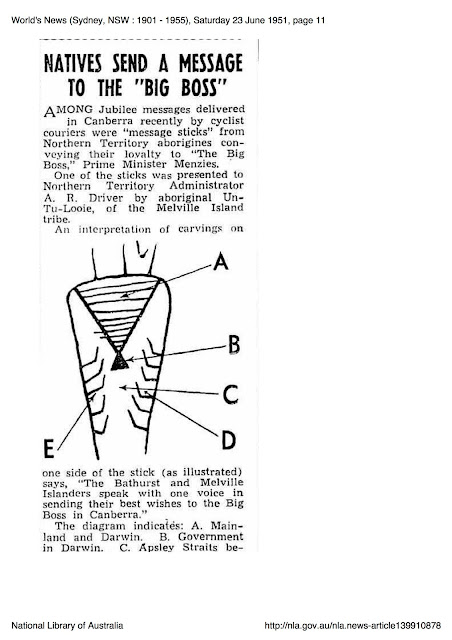 The people of these islands are proud of their heritage ... their art is traditional and meaningful... 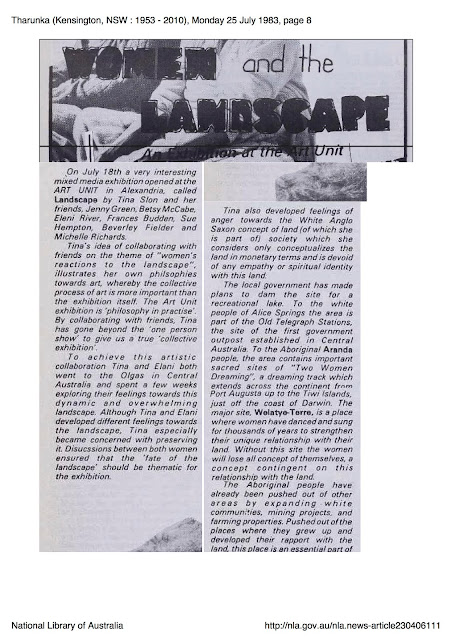 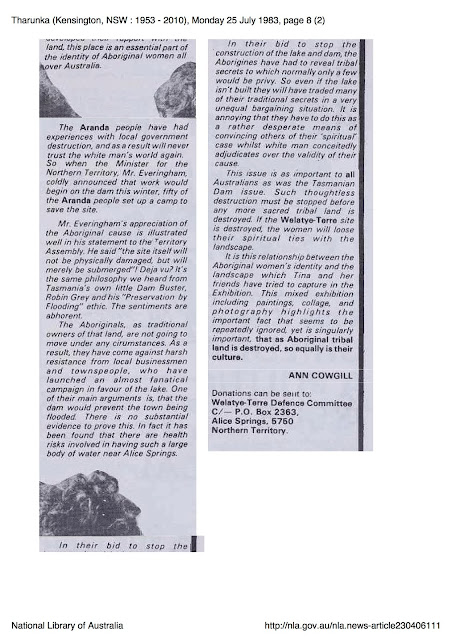 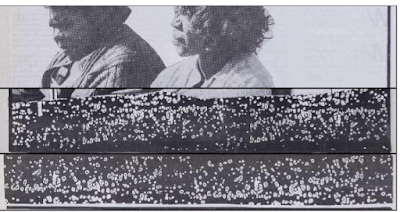 So many are working to combine the best of both worlds, bringing health services and education to the islands without taking over the traditional values.... including Sister Anne Gardiner who has been on Bathurst Island for 40 years. 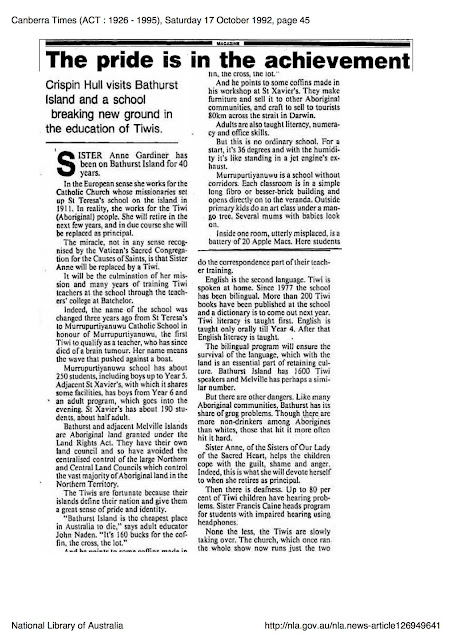 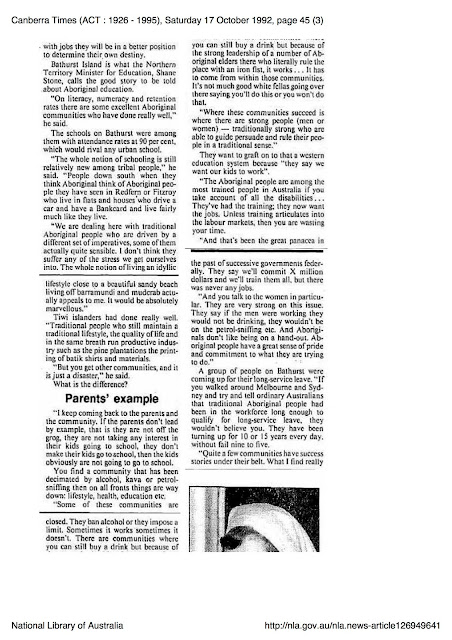 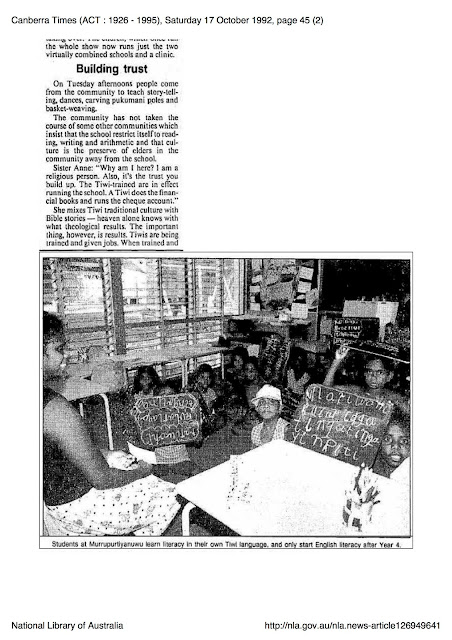 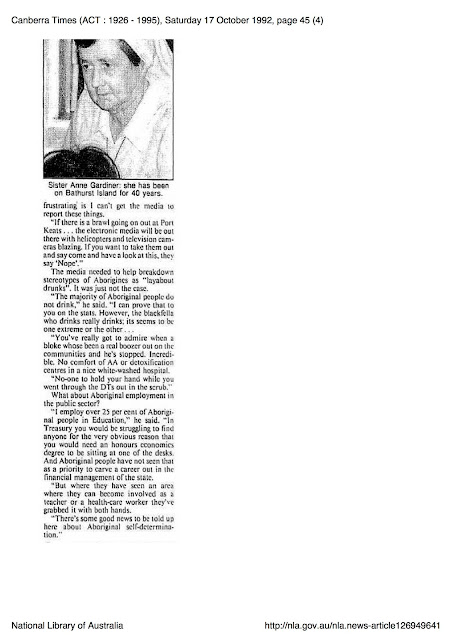 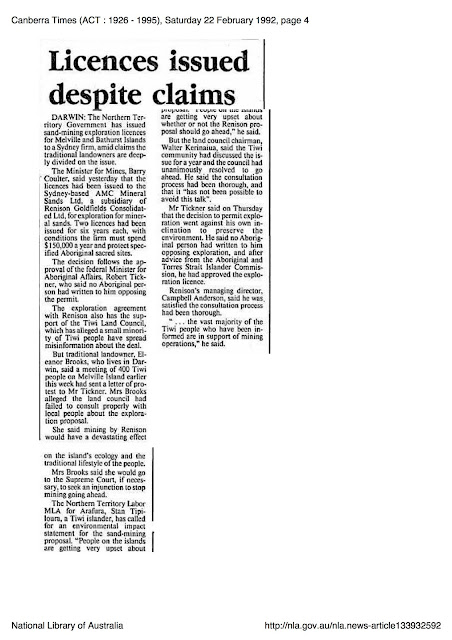 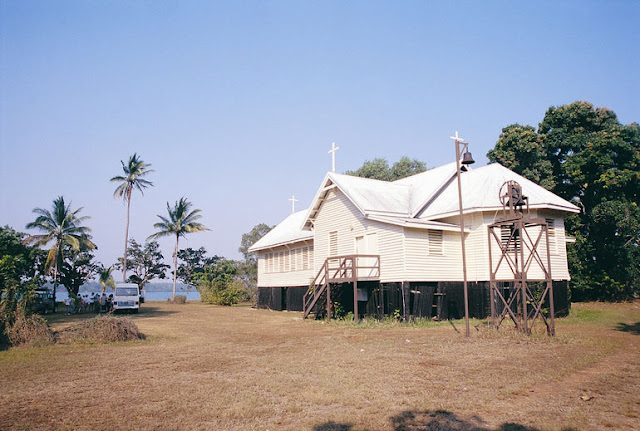 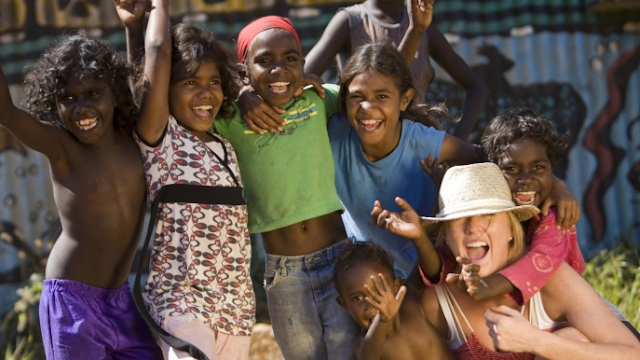 The Tiwi Islands can only be visited on a pre-arranged tour with an Aboriginal guide and you will need a permit to visit. In this truly unique and remote part of Australia you'll experience the cultural differences between the Polynesian-influenced Tiwi people and the indigenous people of Arnhem Land just across the water. Most of the Tiwi Islands population live in the settlements of Wurrumiyanga; Pirlangimpi (Garden Point) and Milikapiti (Snake Bay) on Melville Island.
The Tiwi Islands have few tourist facilities. There is no car hire and very few places to stay with the exception of a couple of remote fishing lodges. The Tiwi Islands are renowned for their excellent fishing. You can stay at one of the fishing lodges or join a deep-sea fishing expedition.   tiwi-islands.html

These islands have so much to offer... no wonder they are known as the islands of smiles..

Where to next? Maybe time for a short break before we continue our journey... 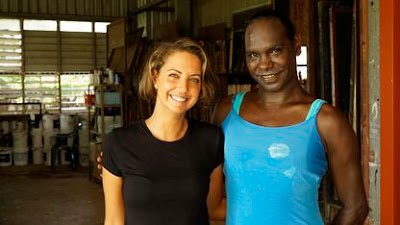