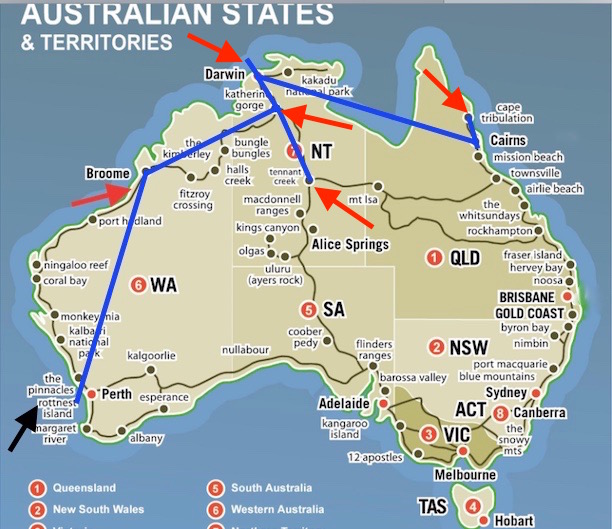 Ever wanted to circumnavigate Australia? We still have a way to go...we'll be going on quite a journey, at least virtually, and clockwise. So as to make sure all states and territories are covered, we started in Western Australia and explored a little of the early history of a small part of this massive state via TROVE...

We've had to travel back to Darwin, before leaving the Northern Territory, then across to Cairns, in North Queensland... but we're not stopping there, instead heading to the tropical north, to one of the most beautiful areas you can imagine... isolated yes, but perfect for that great getaway... to Cape Tribulation. Once known only as the place well named by Captain James Cook... it's now known for it's eco friendly resorts, beautiful scenery and an idyllic getaway. 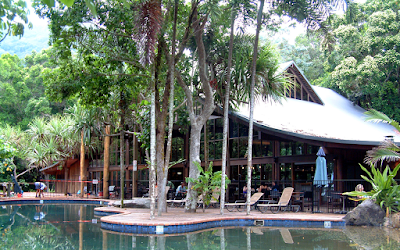 Wikipedia describes it as in the following excerpts...

"Geography
The locality is 110 km (68 mi) north of Cairns. It is within the Daintree National Park and the Wet Tropics World Heritage area. It is within the local government area of Shire of Douglas (between 2008 and 2013, it was within the Cairns Region).
The locality contains a small number of bed and breakfast eco lodges, tourism resorts and backpacker hostels. A few very rare plants can be found on Cape Tribulation.[5]"

In the 1930s some European settlers started arriving in Cape Tribulation, but they found the rainforest environment an extremely challenging one within which to establish a settlement. Various ventures such as fruit and vegetable farming, fishing, cattle, and timber cutting were started and abandoned over the years, and having weekly barges as the only transport in and out was another limitation. In the 1960s a rough track was bulldozed and the first vehicle access created, although the road remained a four-wheel drive track until the early 1990s. In 2002, the road was finally sealed all the way to Cape Tribulation and in early 2011 the last bridge was built creating year round all weather access to Cape Tribulation for the first time.[7]"

Let's go back in time to learn a little more about it's history... 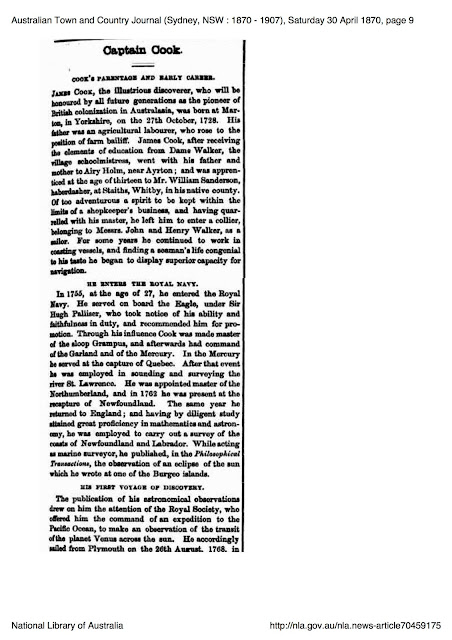 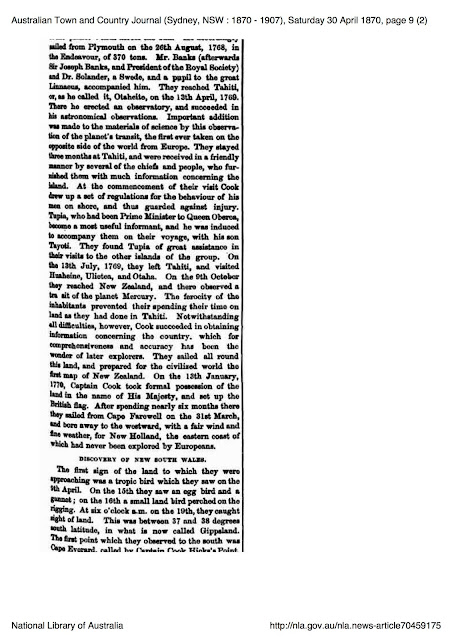 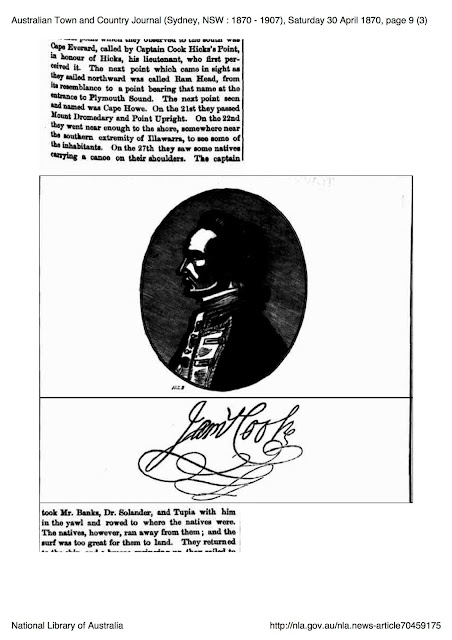 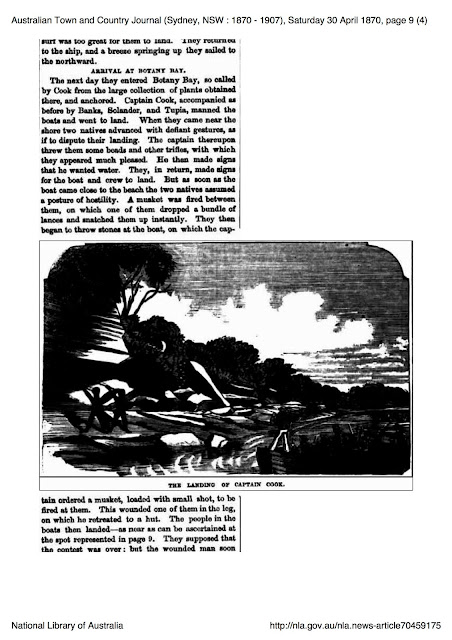 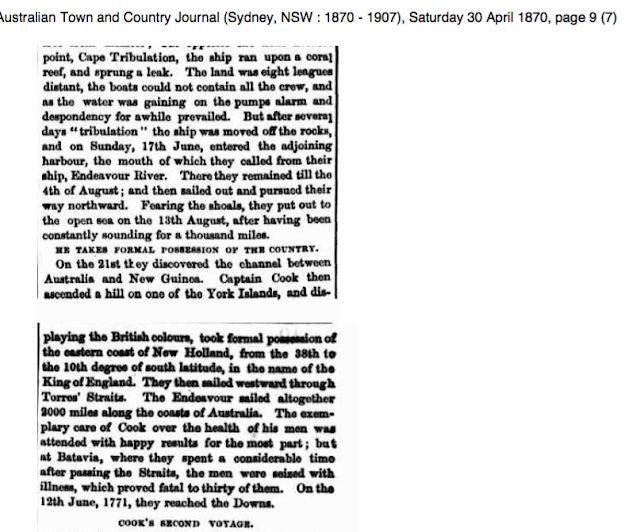 As this article is very long, I have only included the first half dozen pages... if you contact me, I can email you the full .pdf or you can source it through TROVE using the details at the beginning.

Searching through TROVE maps, I came across this chart...it shows his journey from Cape Tribulation to Endeavour Straits.
as always you can click to enlarge.. 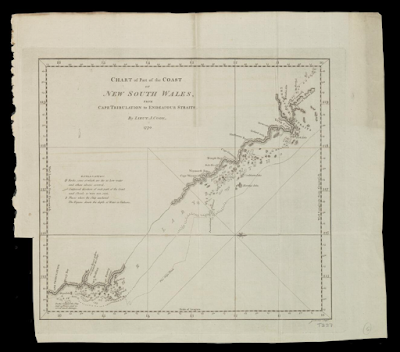 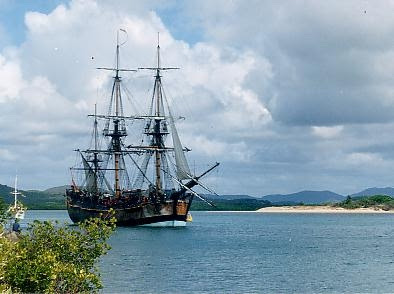 The area was by no means unoccupied, as can be seen in the following article.. from 1862. 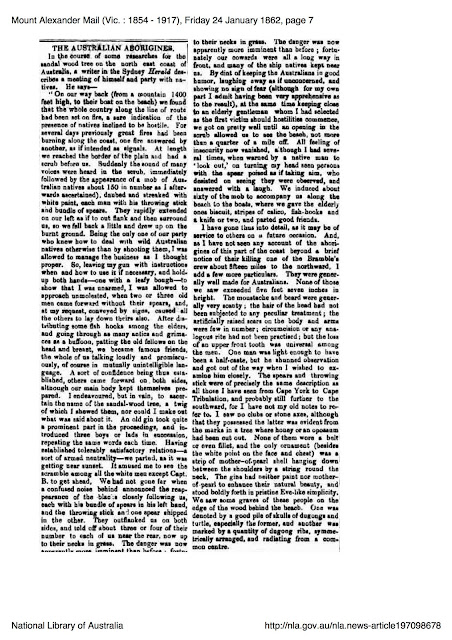 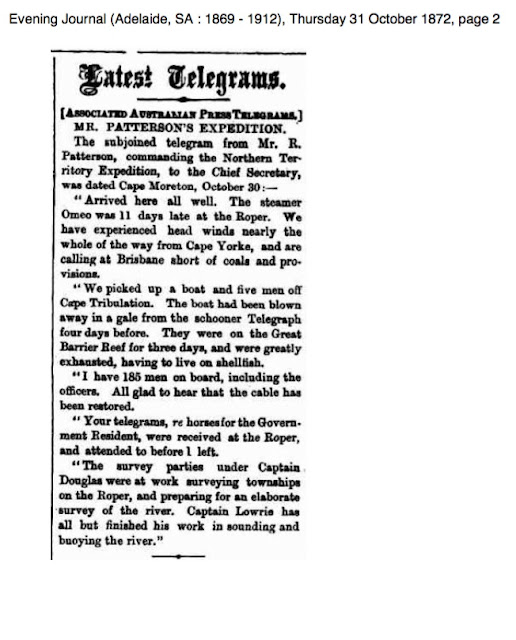 By 1873, with shipping increasing up the coast, there were calls for navigation lights... Cook had come to grief on the Endeavour Straits and the coastline wasn't the easiest to navigate.

An excerpt from the article entitled The New Mail Steamers  .... 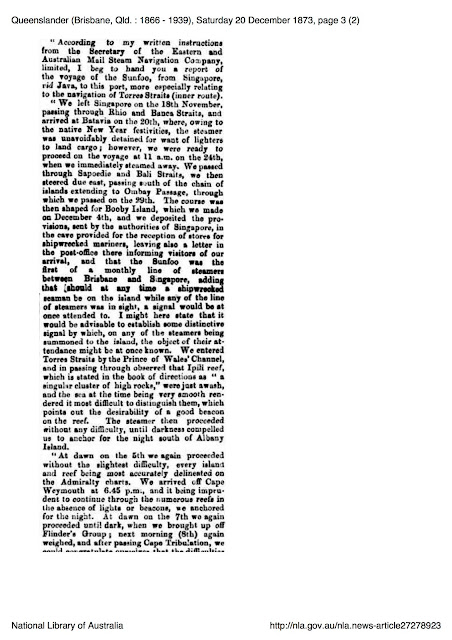 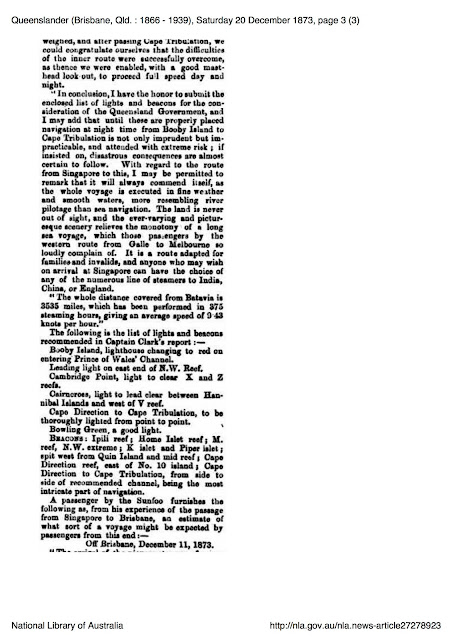 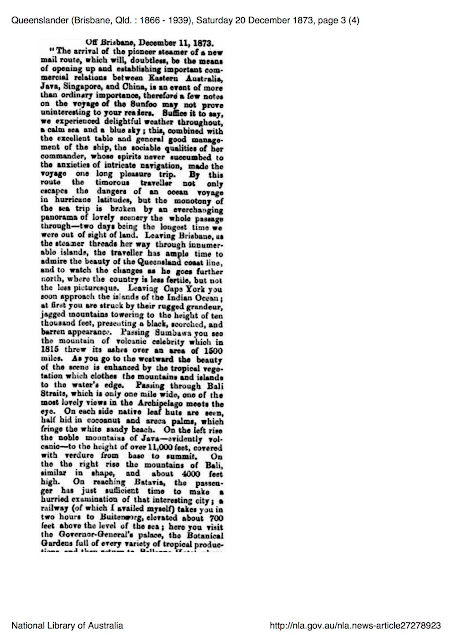 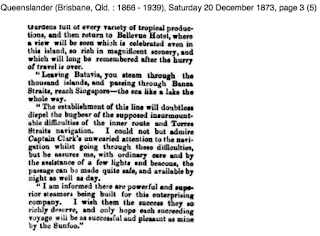 The Australian Eclipse Expedition had a number of people in the party, including a 'special correspondent' from the Argus, Sydney..
They boarded the 'Governor Blackall'  on the afternoon of Monday, 27th November, 1871, in Sydney.  The ship which "had been lent by the Queensland Government on condition that she was insured and docked before and after the voyage, is a capital sea-boat of 330 tons register, and she is as conveniently fitted as her size will admit of."

The article describes the beauty of the area as they ventured north.. they were very impressed with Fitzroy Island with it's lucious vegetation and amazing plants, which delighted "Mr. Moore, the Director of the Sydney Botanic Gardens" who had collected some beautiful fan palms, among many other items. 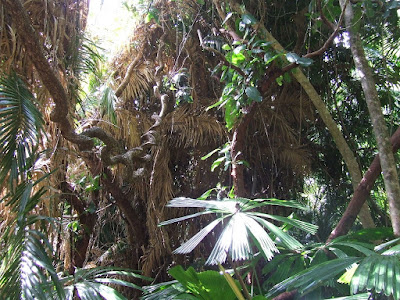 
An excerpt from the article above, by the 'special correspondent'.. 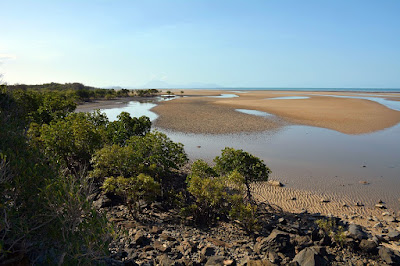 It seems many were impressed by the extraordinary beauty of the area... how vastly different it was to the English countryside, or even the area around Botany Bay. 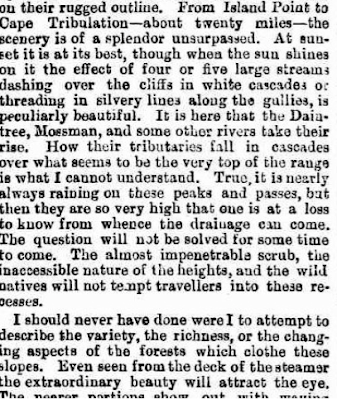 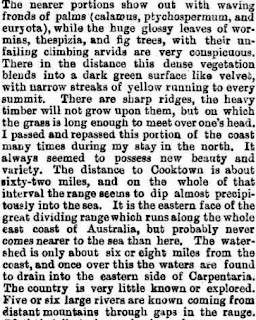 The area continued to be noted for the number of shipwrecks, though intrepid explorers forged on.. 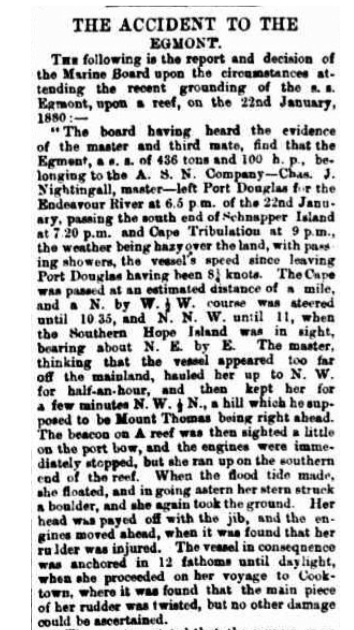 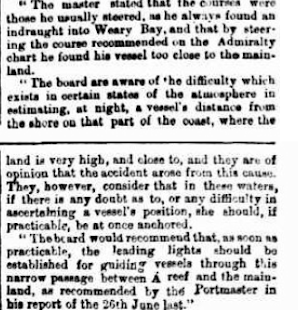 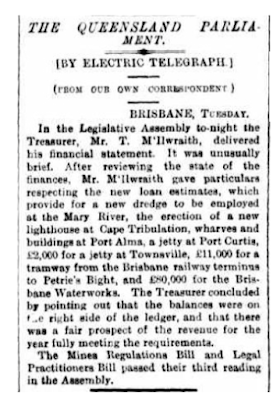 It took quite a while and no doubt many requests before this announcement was made  ... shared by Electric Telegraph no less..

Reports of Captain James Cook's voyages continued to be popular in the newspapers of the time... 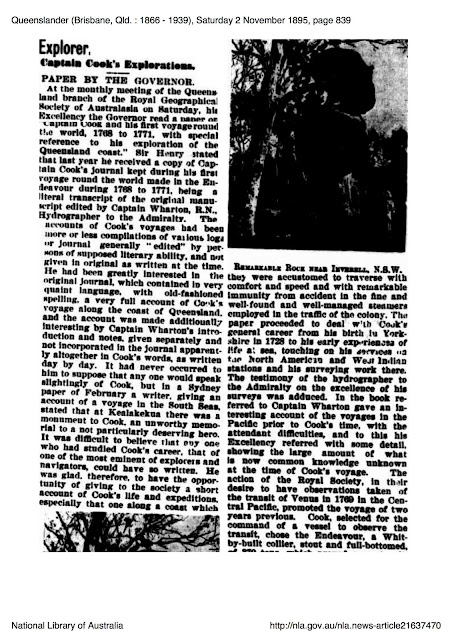 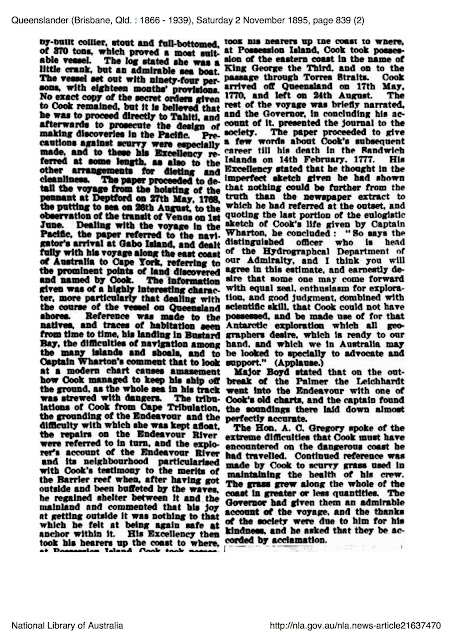 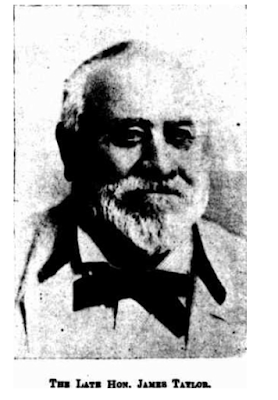 Today, Cape Tribulation is a place to enjoy all the beauty of nature, and is thankfully, a whole lot easier to reach... Whether you stay in a resort, a backpacker's lodge, camp, or visit with a tour group, it would be hard to imagine not being overwhelmed by the feeling of being in paradise. 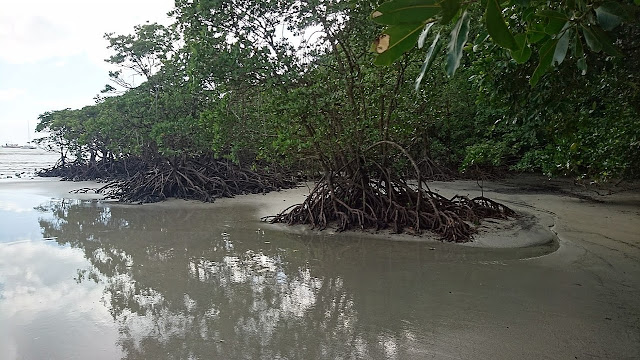 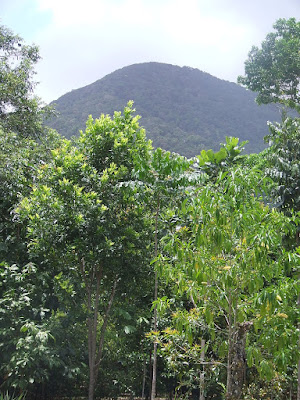 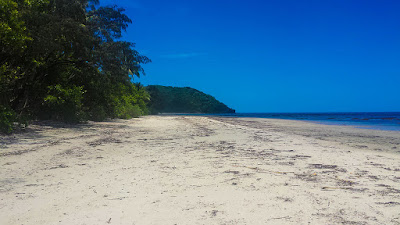 on the edge of the forest
Luxure photographer..
CC BY-SA 3.0  au 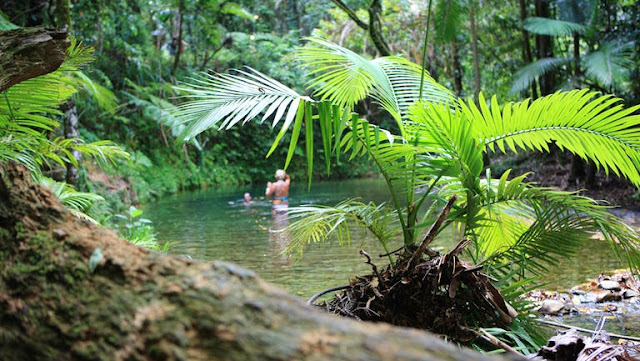 Where to next?
I would love to hear from you as to your favourite place so far...
please comment below. No passport needed.

Two years ago today, I commenced this blog.
It is my self indulgent place, the place where I can share my passion for
Australian Colonial History, family stories related to Australian places,  great authors, numerous stories related to TROVE discoveries, and did I mention my passion for convict tales?
It seems my ever growing list of readers share the same interests.

If you haven't yet done so, and would like to, you can easily subscribe...
see the options in the side column.
Thank you to all of you for your support.