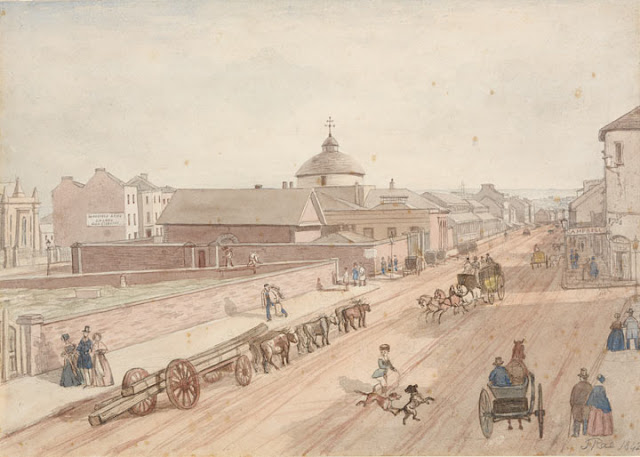 Picture of Sydney Town Hall cemetery wall in 1842 (on left of picture). Sydney markets / police station shown to the north of the site. Source: The Daily Telegraph

Though the Old Sydney Burial Ground (above) is said to be the first official colonial burial ground in New South Wales, there were other burial grounds prior to this.

The first burials in the colony were utilitarian and practical. The fledgling township, struggling against the alien climate and conditions, could do little but dispose of the remains. Nothing survives of the first series of informal burial grounds established around the Rocks. What little we do know is gleaned from incidental descriptions in official documents and letters.
Little is known about the burials during the first five years of the colony. What we do know is due to the extensive research undertaken by Keith Johnson. From early correspondence and diary entries it seems the first informal burial grounds were located close to the infant township. It is hard to reconcile the different descriptions. There are references to one at Dawes Point for mariners and seamen, another within the Rocks, possibly somewhere within the block today bounded by Essex, Gloucester, Grosvenor and Harrington streets, and a third behind the military barracks at Clarence Street. [2]" 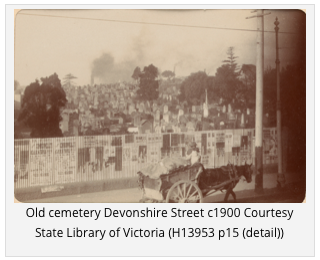 Devonshire Street also preceded it. When that cemetery was declared closed, a number of reinterments were carried out and coffins and headstones transferred to the Old Sydney Burial grounds, as it is now known. Not all were moved. You can check the list of those known to be reinterred here.. this is a direct download. 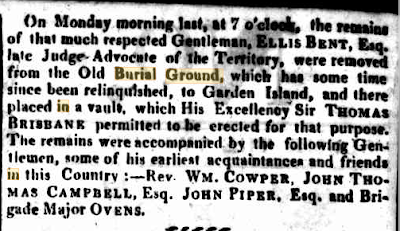 "The settlement of Parramatta had its own series of burial grounds as the distance between the settlements was too vast to just have a single colonial cemetery. St John's Church of England Cemetery was established in 1790 and buried all denominations until other cemeteries were established. The Catholic Church gained St Patrick's Cemetery in 1822. St John's Cemetery, Parramatta, remains the earliest undisturbed colonial cemetery in Sydney with headstones dating back to 1791." 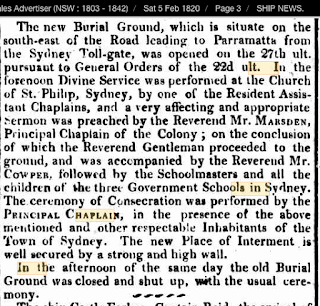 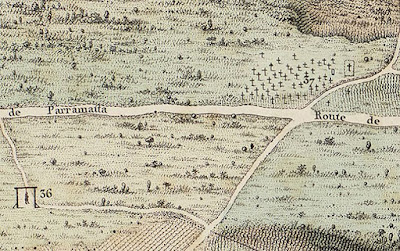 From the collections of the 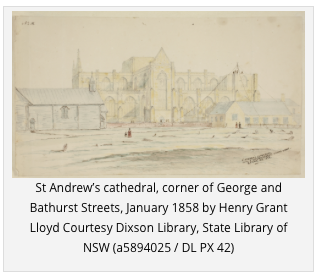 TROVE  has many stories and mentions regarding cemeteries, burials, strange and odd stories about unwelcome visitors... 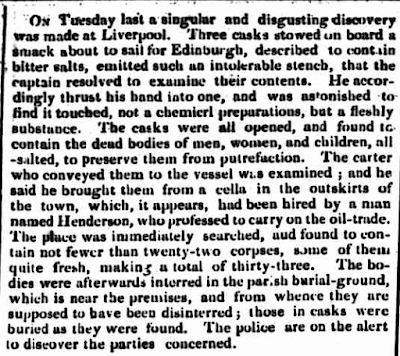 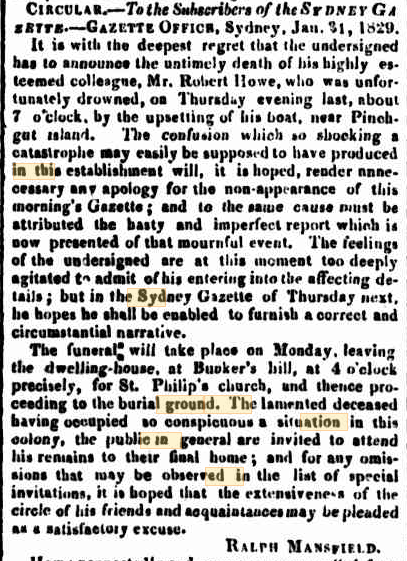 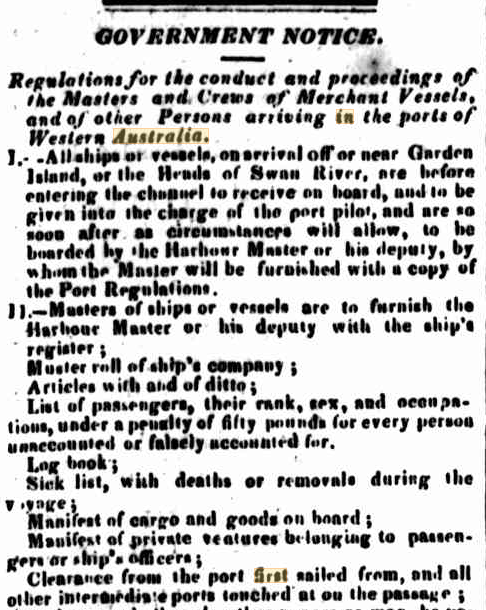 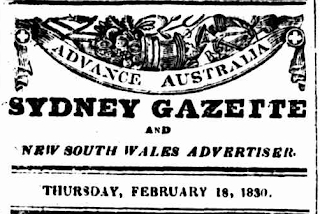 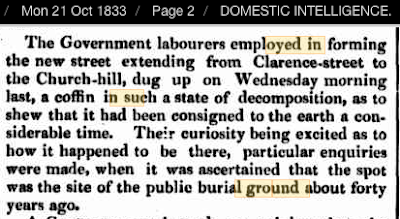 The Sydney Gazette and New South Wales Advertiser 31 Oct 1833 sale or no sale? 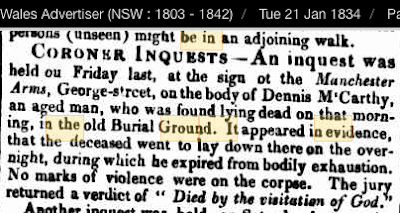 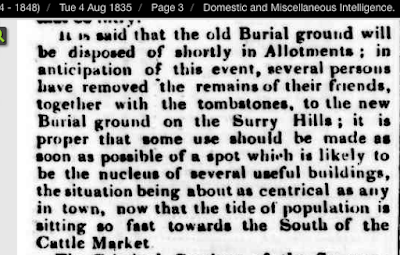 The Australian (Sydney) 3 May 1836 fire in Newcastle NSW cemetery The Australian (Sydney) 19 May 1837 ..
removal of public stocks from the Old Burial Ground
Any truth to the rumour that they are being considered for new use? 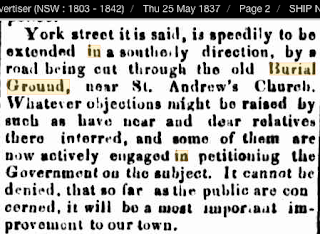 The burial ground near the present market was the first one in the Colony, and up to the year 1820, was the only one used in  Sydney. In this year, the consequences of the ground being nearly full, and the extension of the town in that direction rendering it unpleasant to inter any more bodies there, the present burial grounds, where each sect has its separate yard, were laid out. The old burial ground is in adeplorable state, amny of the old stones being knocked down, and a parcel of mischevious boys have amused themselves by breaking tghem jus. A lead coffin lying exposed, a passer-by observed a couple of boys amused themselves by cutting square pieces of gthe lead out, and on his skin tghem what they were doing that for, one of them said it would "make some dumps".
Many of the inscriptions on the tomb-stones are almost worthy of being preserved as specimens of composition. Take for instance the following verses----

with sollom delite I survived
the Corps when the spirit was fled
happy s the penitent sinner
& longs for to lie in his Stead.
his languishing head is at rest
his thinking and sorrow are oer
that quiet and musical breast
will never be afflicted no more.
------------

A sudden change she in a
Moment fel she had not time
To bid her friends farwell
Think nothing Strange
Chance happens unto all her
Lot to day to morrow yours
May fall.

He was a Constable and Chinea
Mender, but Death his
Genious has suspended
His Chinea broke, o well
A Day, and Crates of ware
His turned to Clay.

Do  not regret your loss, tho' it will
be felt severe, and when you pass this
place do not coming crying here.

The oldest stone in the ground appears to be one in 1792 on the Captain of the
ship Sydney Cove, which was burnt near the place where Campbell's Wharf now
stands. The following inscription, which is the lst we have room for, is rather
descriptive of the Colony:-
"Sacred to the memory of John Miller aged 45 years who was barbarously murdered
at his farm in the district of Petersham on Monday 30th Sept 1826 by four armed
ruffians whilst peacably sitting wife and five of his children."

It is intended to build a palatial residence for His Lordship the Bishop of Australia on
the ground in our early period; but, in the mean time, the gaps in the wall are to be
repaired for the purpose of keeping persons from trespassing on it. 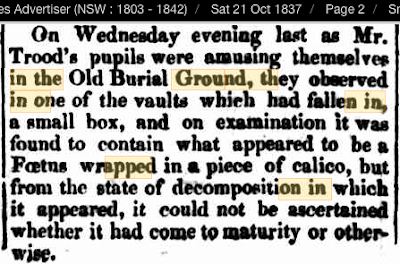 There are so many other sites, along with TROVE, that can tell you more about the history and traditions of the time…
A couple that you may not have come across
but which are well worth looking at are...

http://users.tpg.com.au/shammell/old-bury.htm
Posted by Crissouli at 00:04