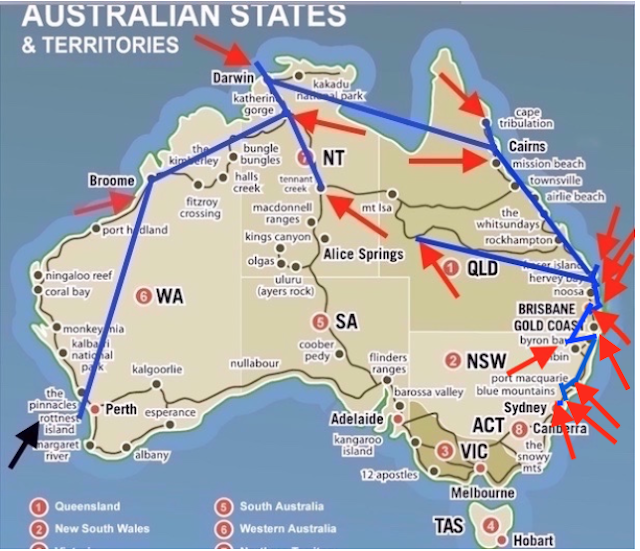 
Ever wanted to circumnavigate Australia? We still have a way to go...we'll be going on quite a journey, at least virtually, and clockwise. So as to make sure all states and territories are covered, we started in Western Australia and explored a little of the early history of a small part of this massive state via TROVE...from Rottnest Island to Broome..then across to Katherine Gorge, then Tennant Creek, from there to Darwin on the way to the Tiwi Islands, Bathurst and Melville.

After a break, we resumed our travels...  heading in to New South Wales... not too far over the border, to a place that literally stands out, begging to be noticed. It was first given a European name by Captain James Cook...  he recorded seeing " a remarkable sharp peaked mountain lying inland". That place was the very imposing Mt. Warning.. you can refresh your memory here

The New Year saw us travelling again, refreshed and ready to go to yet another beautiful place. Many of you will have stopped there, if only to get a photo taken on the border between Queensland and New South Wales..Coolangatta one side, Tweed Heads on the other. Hard to believe that this was only known as Point Danger in times past, as indeed it was... the lighthouse is a clue...

That place brought back many wonderful memories for so many of you...it was lovely to read your comments and receive your emails..

We moved south again, to a place that means a lot to my family, but also has a very colourful past. It is beautiful, a popular tourist place, the centre of a very busy district, steeped in Australia's colonial history.. it's the bustling town of Port Macquarie. It is around 5 hours drive south of Point Danger.

I concentrated on the convict history of Port Macquarie, perhaps we will return another time to see how the city has changed.

We then headed down the coast a bit, then inland, to another town connected to my family.. the country town of Aberdeen, where my father and five of his brothers were born, him being the youngest. It seems many of you have driven through this town, but never explored it. You would have passed my family's old home .. on the north side of town, just over the bridge on the left hand side heading north.

After backtracking a few hours and heading back to the coast, we explored the bustling city of Newcastle. It was great to hear that a number of you who thought you knew Newcastle reasonably well found a few new places to check out on your next visit. 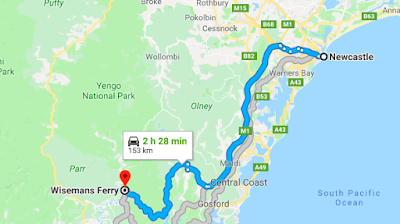 It was only a relatively short drive, just a couple of hours away from Newcastle, to our next destination... Wiseman's Ferry. Heard of it, but never been there? It took me many years to actually visit, but I'm glad I did. This is another place that has a family connection for me... this time, on my maternal line...and so many of you enjoyed the visit also, going by your comments and emails. Thank you.

From there, we headed to a place that I'm sure most of have heard of, once a year at least... a reasonably thriving place which has the best New Year's Eve fireworks in the world.

Ok, I could be slightly biased and yes, it is Sydney, capital of New South Wales, site of the oldest settlement in Australia and another place which is linked to my family. We explored a few of the heritage listed places and some of the landmarks, but there is so much more to see.

We can't cover it all, but one place which is well worth exploring is Botany Bay... the proposed site of the first settlement. Lieutenant James Cook first landed there on April 29, 1770.

To quote from Wikipedia...
"Lieutenant James Cook first landed at Kurnell, on the southern banks of Botany Bay, in what is now Silver Beach, on Sunday 29 April 1770, when navigating his way up the east coast of Australia on his ship, HMS Endeavour. Cook's landing marked the beginning of Britain's interest in Australia and in the eventual colonisation of this new "southern continent".[6] Initially the name Stingrays Harbour was used by Cook and other journal keepers on his expedition, for the stingrays they caught.[7] That name was also recorded on an Admiralty chart.[8] Cook's log for 6 May 1770 records "The great quantity of these sort of fish found in this place occasioned my giving it the name of Stingrays Harbour". However, in the journal prepared later from his log, Cook wrote instead: (sic) "The great quantity of plants Mr. Banks and Dr. Solander found in this place occasioned my giving it the name of Botanist Botany Bay".[8]
Eighteen years later, in 1788, Governor Arthur Phillip sailed the armed tender HMS Supply into the bay on 18 January. First contact was made with the local indigenous people, the Eora, who seemed curious but suspicious of the newcomers. Two days later the remaining ships of the First Fleet arrived to found the planned penal colony. However, the land was quickly ruled unsuitable for settlement as there was insufficient fresh water; Phillip also believed the swampy foreshores would render any colony unhealthy as the bay was open and unprotected, the water too shallow to allow the ships to anchor close to the shore, and the soil was poor.[9]"
You can read more here  https://en.wikipedia.org/wiki/Botany_Bay 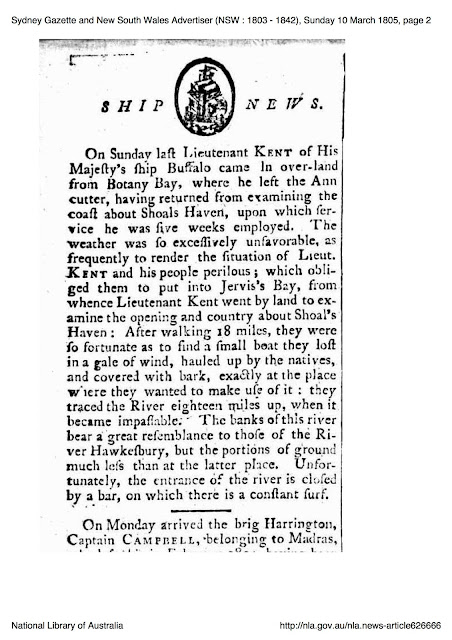 From Botany Bay, explorations around the area were made... 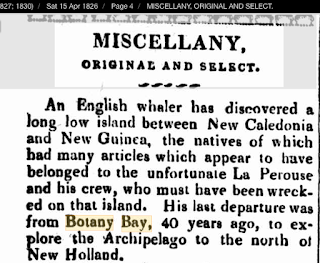 The beauty of the area was apparent to all, it was the water supply that was the concern. What a great contrast to the English countryside left behind. 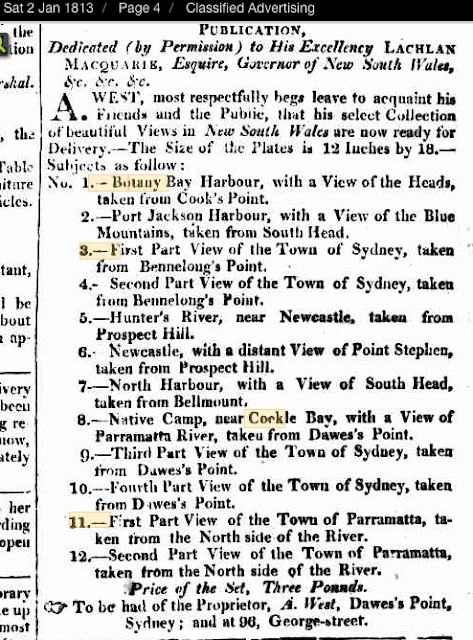 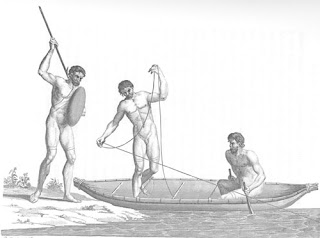 Black-eyed Sue and Sweet Poll of Plymouth, England, mourning their lovers who are soon to be transported to Botany Bay, 1792 Public Domain  NLA 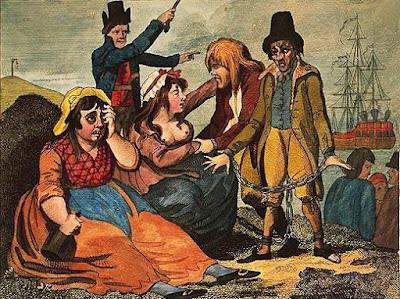 The Sydney Gazette and NSW Advertiser 25 Feb 1815
Where there are settlements.... 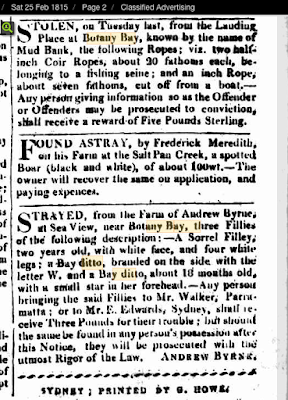 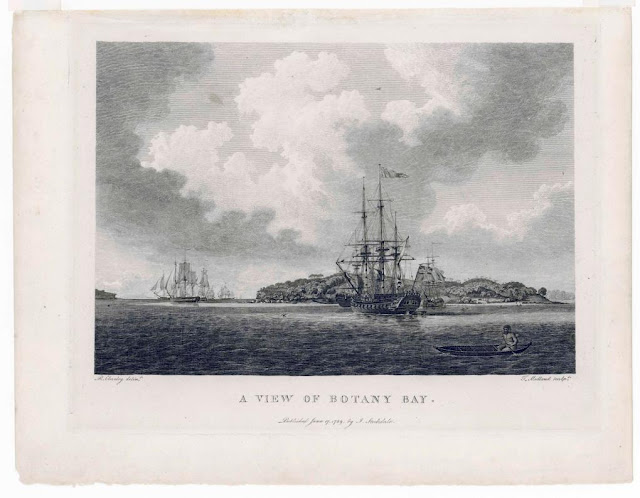 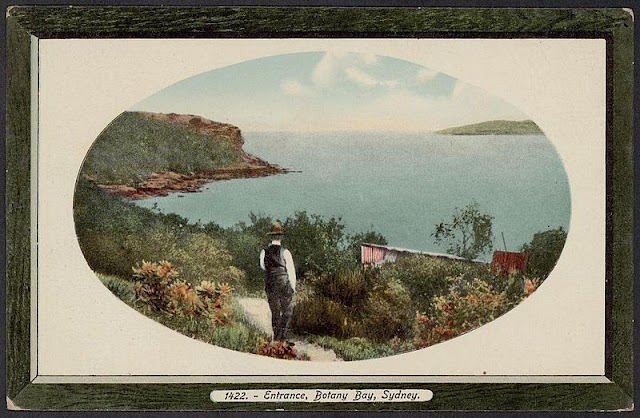 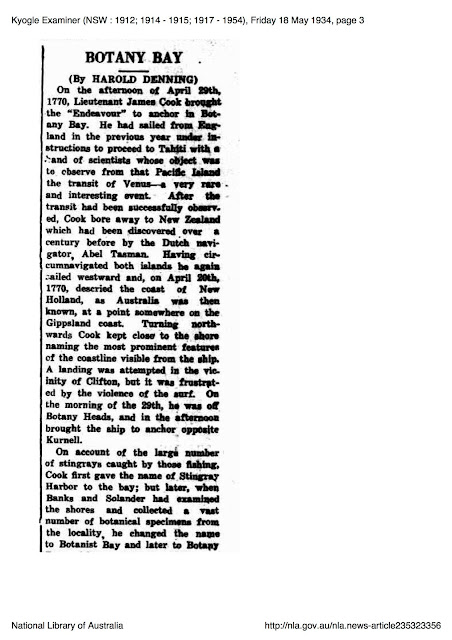 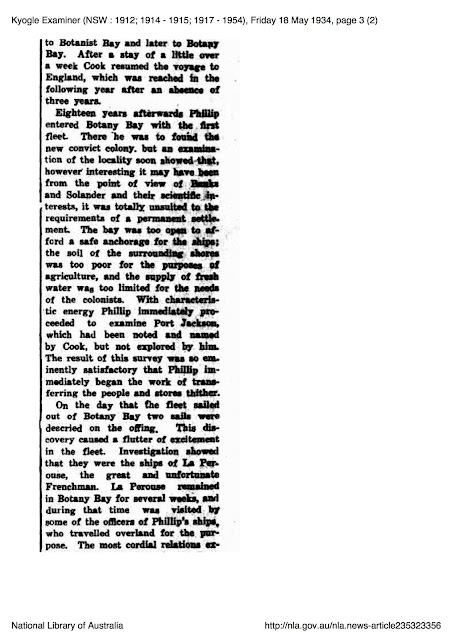 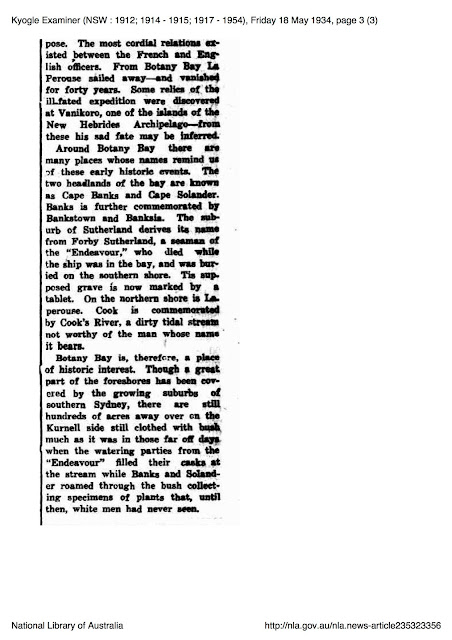 This gives an idea of the size of the bay...

Aerial photograph taken on a flight from Newcastle to Melbourne.
Taken by Tim Starling   CC BY 2.0 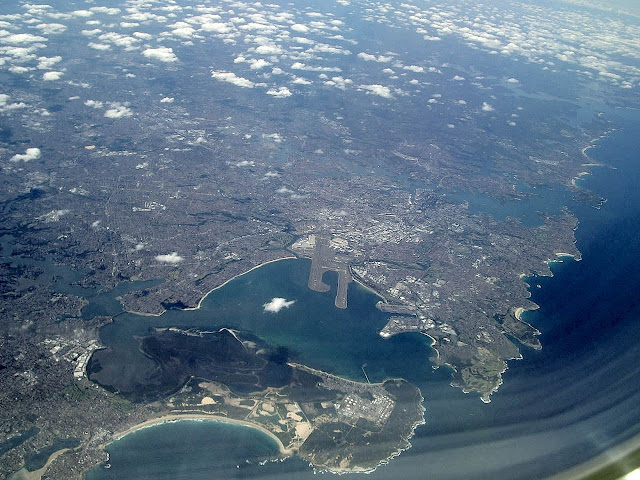 Without the arrival of the English in the exact time in 1788, which was planned "to get rid of 717 convicts", the country may well have been destined to be under French rule.. an interesting article. 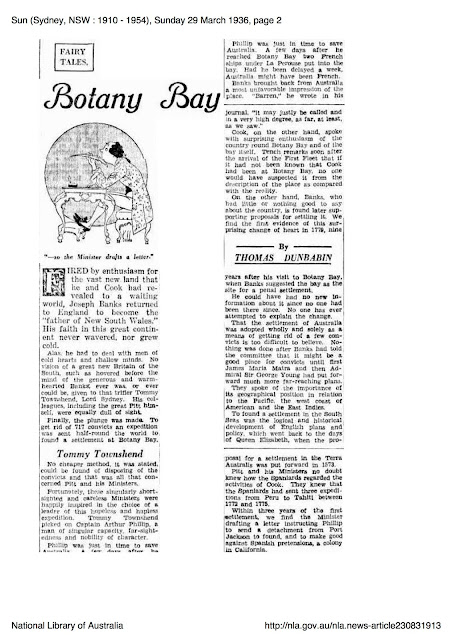 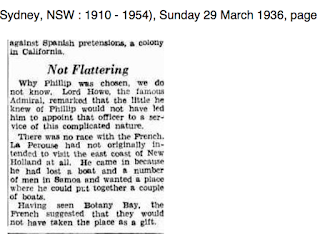 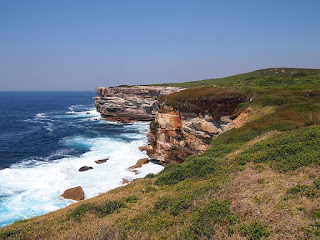 The following are from a series entitled BOTANY BAY and published in sequence in The Australian Women's Weekly.
Though I won't publish the lot here, I will add the links for you to follow... just click on the url, in bold to read the rest of this first instalment.. 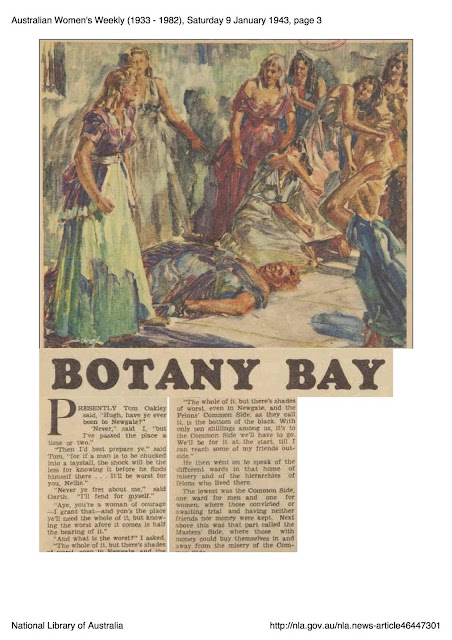 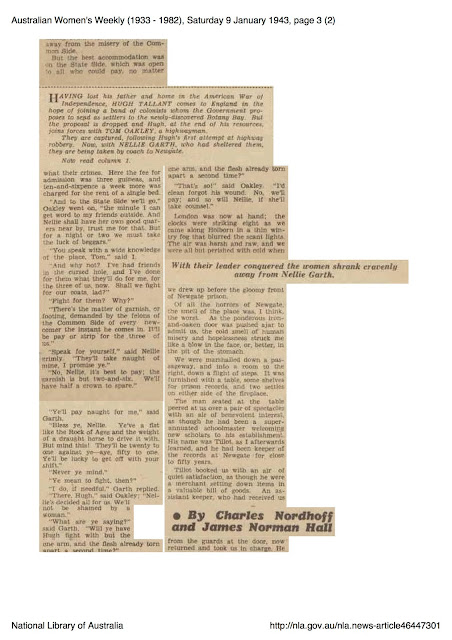 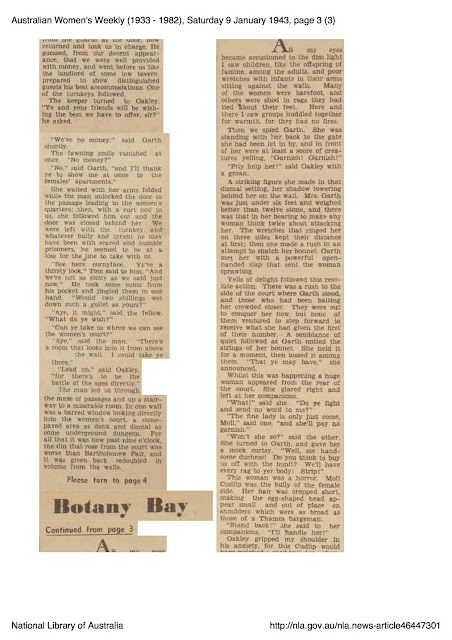 The rest of the articles are at 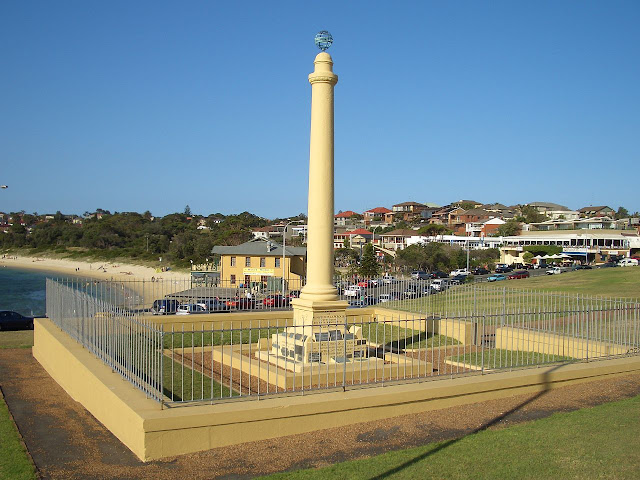 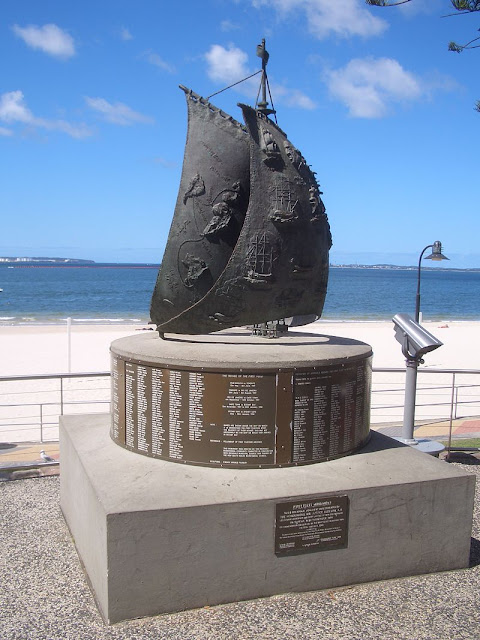 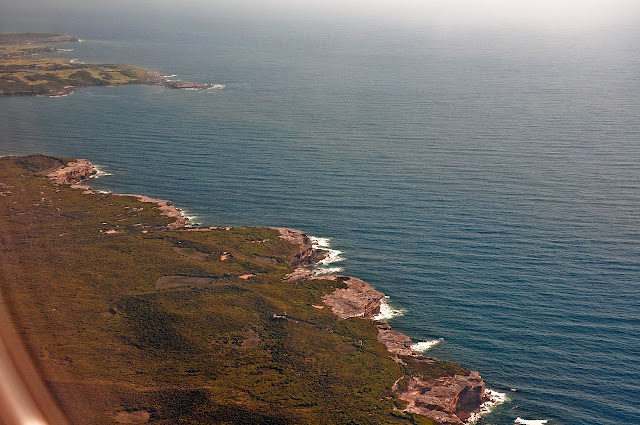 The mouth of Botany Bay as it meets the Tasman Sea, as viewed from the air, above Kurnell
Botany Bay entrance, NSW, 26th. Nov. 2010 Phillip Capper

Botany Bay, a beautiful area, with so much history